Dahl Study: Lamb to the Slaughter

A woman who was always serving her husband - drinks, homemade dinners, etc. - is told that he's leaving her. On autopilot, she goes to get some meat from the freezer to prepare dinner for him. Before putting the huge leg of lamb in the oven, she clubs him with it, then runs to the grocery (for vegetable sides) to have an alibi. She comes home to "find" her husband dead and calls the cops. Her alibi checks out with the grocer. The cops can tell her husband was hit with a heavy object, so they are looking for it, but agree to take a break when she offers them some of the lamb that's been cooking, since it's way too much food and she's not hungry, anyway.

The film was BEAUTIFUL. I actually loved it more than the story. To be fair, if the story had been done the same way, it would seem like the author was withholding information, so I guess it's fine as it is. The film, though, starts with showing the wife coming in from the store and seeing the body. We're in the dark, but the pieces are revealed to us through flashbacks as the cops question her. So well done (no lamb pun intended!). I would love to see this as a play.

There are a few nit-picky spoilers I noticed in the film, particularly since I'd read the story and knew the outcome. When the wife comes in from the grocery store, she is already/automatically looking at the floor where her husband's body fell after she bludgeoned him. Also, she sees her husband dead on the floor and stays in the house to wait on the cops, not worried that whoever killed her husband might also come after her.
Posted by Allison at 8:29 AM No comments:

The wife has been unhappy throughout most of their marriage, but decides to contact the neurosurgeon and check on the status of her husband's brain. It's there, in the lab as he described it would be in the letter. It's hooked up to things that keep the brain alive and eye functioning, so he can see his wife as she approaches the tank.

This is an interesting take on life and thoughts and what it's all worth, and how it could all work.

The film is quite different from the book, since the bulk of the story is told through the letter the wife gets after her husband's death. This had to be changed so the film wouldn't be boring, watching a woman read a letter while listening to a voiceover. Instead, all of the backstory is presented by the neurosurgeon to the wife, but this presentation lessens some of the shock that comes from reading the story. While the background is given, we are shown footage of a similar experiment done to an animal that succeeded, so some of the wonder of "will it work?" is lost.

The story ended with the wife wanting to take her husband home, but in the film she gets him and it's a bit hokey to see the whole set-up in their living room, with the wife sassing the brain. I like the ambiguity of the story more, but I guess the shock factor and the definite ending were needed for the film version.
Posted by Allison at 8:21 AM No comments:

I'm loving all of these children shows being developed from children's books! I reviewed the first episode of Pete the Cat a looooong time ago, and unfortunately haven't watched the rest of the show yet! It's one that I feel like I should watch with my son, but he'd rather watch the same episode of Paw Patrol for the hundredth time - anyone else have that problem? I'll probably watch several of these Amazon Prime and Netflix kids' shows on my own, and just let him sit in if he wants. 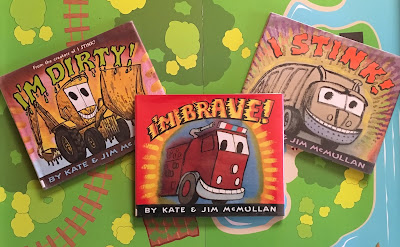 One we can both agree on, however, is The Stinky and Dirty Show. This show is loosely based on books by Kate McMullan and Jim McMullan. It's such a cute show, with the catchiest theme song ever. I love how childlike the characters are, and how full of wonder they are. Stinky and Dirty (from I Stink! and I'm Dirty!) are the main characters, but Brave and Mighty have their own books, too.

I love hearing the voices picked for the characters on the show. Billy West (Futurama), Wallace Shawn (The Princess Bride), Tom Kenny (SpongeBob SquarePants), Jane Lynch, Andy Richter, Joan Cusack, and Whoopi Goldberg all voice characters! Mostly I just love that the two main characters are children. When I read the books aloud, I automatically use a tough voice because the stories are all about showing that different vehicles can do. I read it as a "You don't think I can do this? I'll show you," attitude. Hearing the friendly tones of the show made me wonder if I was totally misreading the books! I might have been reading the book characters a little rude - whoops!

There are already two excellent seasons of this show, and my son and I are both excited to see more! The stories are really cute, and I love the animation style! It's pretty true to the book illustrations, but just looks amazing on screen.

Have you watched The Stinky and Dirty Show? Have you read the books? What did you notice that was similar or different?
Posted by Allison at 8:46 AM No comments:

I was originally put off by the framing of the story - "Let me tell you a story I heard..." It reminded me of stories in undergraduate creative writing workshops, even after we were told to not frame them that way or as dreams.

The meat of the story was SO GOOD. I had no clue what would happen with the pawn shop, and my mind was churning trying to figure it out! I was trying to decide how and why the pawn shop clerk had ripped off the husband before deciding to root for him.

This is a great O. Henry-esque story with a nice twist. It's an interesting case where both characters are "bad" people - so you want to know what happens to them without really being invested, which makes for an entertaining read.

In the introduction, Dahl says the story is short but took him a long time to write because he had to get the plot just right. The film was a bit different - no frame of "Let me tell you this story I heard," which of course made me love it more. There were some minor differences in that Mrs. Bixby traveled by train from New York City to Brooklyn in the story, but flew abroad on film, which also changed how long she was gone and how often she visited.

Everything else was so well done, just like in the story. I would pay good money to know what happened in the elevator after the credits rolled!
Posted by Allison at 8:05 AM No comments:

Dahl Study: Man from the South 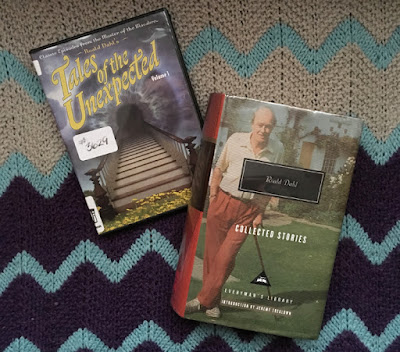 The suspenseful build-up of this story is very well done. I knew the story from Four Rooms, which Tarantino adapted as "The Man from Hollywood" - but the ending of the film is drastically different! I was waiting for that ending, so the suspense might have been ramped up a bit for me. It made the "real" ending seem like a little bit of a letdown, especially after being on the edge of my seat for the bulk of the story. It still has a nice twist at the end, though.

The start of the story had a Salinger-ish feel to it, "A Perfect Day for Bananafish" in particular. It's interesting to read Dahl's children's books with energy and adventure and nonsensical words, and then read a straight-forward story with tension and little emotion. 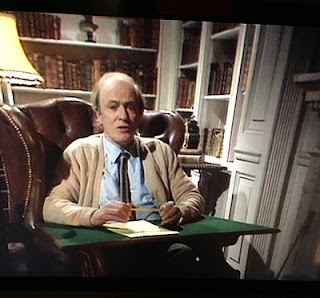 Introduced by Dahl, he explains that he only writes two short stories a year because he knows he has to keep the reader's attention for every second, or else he's "dead".

The story is followed exactly, even really filmed in Jamaica. The suspense during the lighter scene had my heart pounding even though I knew what would happen. That's the sign of a good writer and a powerful story - not dependent on a hook or twist ending that keeps you from enjoying it on repeated readings/viewings (ala The Sixth Sense). Very well done.
Posted by Allison at 8:01 AM No comments:

Roald Dahl has been one of my favorite authors since I read several of his books as a child. I knew he wrote books and stories for adults, but never read any of them until a couple of years ago, when I first read "Man from the South" after seeing Four Rooms.

I've always wanted to do an author study on Dahl, so I finally made time for it! I started reading Collected Stories over winter break. In true booknerd fashion, I also borrowed the DVDs of Tales of the Unexpected - a British TV show that Dahl used to write for. 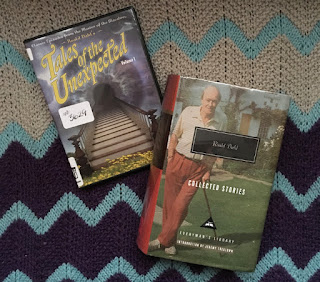 I will be posting recaps of the short stories from Collected Stories and short films from Tales of the Unexpected every Friday, starting this week and running until my photography show wraps up... and maybe a bit beyond.

Oh, I forgot to mention that, didn't I? Last year, I had a photography show, Full Power of Magic, up during the run of James and the Giant Peach at the Circuit Playhouse. My exhibit was inspired by the book. This year, I'll have a photography exhibit up while Matilda runs at Playhouse on the Square. My exhibit this year is inspired by titles of Dahl's short stories. So I guess the start of this author study could also count as photography research...

My other posts relating to Dahl:
Banned Books: The Witches
Dahl
The Many Matildas

Posted by Allison at 8:49 AM No comments: