When I was a joint MakerSpace teacher + librarian, I loved using books as my jumping off points for MakerSpace lessons. Books are my comfort zone, and reading a book aloud to start a lesson is a great way to introduce a concept and get everyone on topic. These "lessons" don't have to be done for an entire classroom, and don't even have to be done the way I outline them here, but I thought it would be something fun to share.

Piggybacking off the last STEAM Sunday: Mix It Up! is another color mixing lesson with Monsters Love Colors by Mike Austin. I used this with Early Childhood students, ages 3-6, because it's a bit sillier and younger than Mix It Up! I'm sure it could be adapted to be used with older students, but since Mix It Up! worked so well with older kids, I didn't worry about aging this title up. 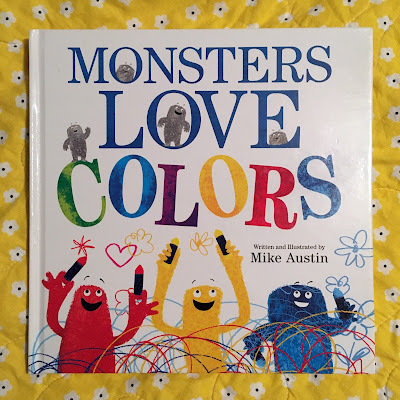 Monsters Love Colors is a fun, silly way to incorporate a little movement ("Mix, dance, and wiggle!") into a read-aloud before you get your lesson started. Since we had done the Mix It Up! lesson with colored water the week before, students already knew color mixing basics. That's just one reason I loved that this title was more fun - they had a good time wiggling and sharing their knowledge, and it was also an engaging refresher course.

For this hands on activity, there was a plate of paint at each work station: red, blue, and yellow. I originally did this lesson in Fall, so the challenge was to take those three colors and paint "Five Little Pumpkins" (which we read in library that week - tying it all together!). This meant they had to make orange and green. It was a lot of fun to see students draw their own pumpkins and then color them in.

There are a lot of challenges you can do with color mixing that don't depend on a season, so have fun thinking up things students can draw that require purple, orange, and green paint.
Posted by Allison at 8:27 AM No comments:

Thanks to KidLitExchange and Little Brown Young Readers for sharing Dear Universe by Florence Gonsalves. This book publishes on 5/12/2020, and I love that it’s going to come out right around graduation season, since finishing high school is such a poignant plot in this book. 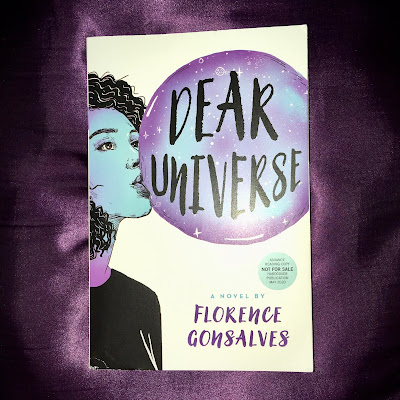 Chamomile is counting down the days to prom - and the window for her boyfriend to ask her is dwindling. She tries not to think about it too much, and it’s not hard, because all her friends are looking forward to the senior volunteer trip to Nicaragua. The trip isn’t really on Cham’s radar, because she hasn’t finished her college admissions essay, which is a requirement to go. Cham isn’t even sure she’ll go to college in the fall - she’s too worried about her dad, whose disease is progressing quicker than anyone thought it would.

Cham is determined to keep her home life separate from her school world. She’s constantly pleading with the universe to help her pull it off, but she knows she can’t keep it up forever.

This story makes the reader incredibly invested in Cham’s life - or lives, as she’d prefer to have it. Some of the sentences made me gasp because they capture being seventeen so perfectly - on the brink of a huge life transition, with the world ready for you, while also fearing what might come next.

Getting real for a minute: Sometimes I feel jaded when I read YA books because the romance is so hopeful and pure, it makes me roll my eyes - even though I remember that’s how it was. Or the teens have all the talent in the world if they just stand up to their parents to go after their dreams - but some real kids don’t have that, they’re just average and can’t recognize any outstanding skills in themselves. This book, on the other hand, is the most REAL YA book I’ve read in awhile, that reminds me of my (eons ago) high school self and my friends, and the teens I recently got to know at the library. There’s a bit of romance, but it’s not all happy. There’s a lot of struggle, but it’s real. There’s a lot of true uncertainty and emotion expressed honestly. And there is so much hopefulness and fear that you’ll remember being seventeen in the best way possible.
Posted by Allison at 5:41 AM No comments: