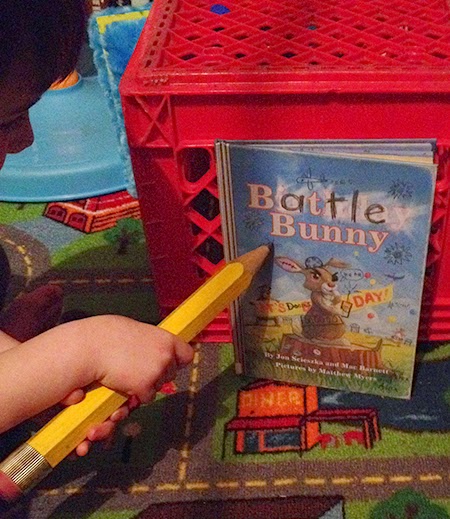 Plot Summary
On his birthday, Alex is given a sickly sweet book called Birthday Bunny by his gran. It must be too boring for him, because Alex takes his pencil to the book and draws all over it, completely changing the story! He modifies the illustrations and changes the text, adding in his own lines as well. Birthday Bunny is quickly transformed into the more interesting and suspenseful Battle Bunny!


Critical Analysis
This book is actually two stories in one - three, if you count the original, yet bland, Birthday Bunny tale! On the surface, there is the story of Battle Bunny, but older readers will be able to appreciate the underlying storyline of Alex changing the book himself.
The story of Battle Bunny is interesting, but the best part is the illustrations and overall book layout. It’s fun to search each page for what Alex added to the pictures and text. He ever wrote on the copyright page and the back cover. The original illustrations are beautiful, sweet cartoons that looks like a classic picture books. Alex’s additions actually look like pencil marks - you’ll be tempted to take an eraser to them just to see if they’re real!
This book will inspire children to use their imaginations more - not just when they’re playing by themselves or with friends, but also when they’re reading! It shares a great message that you don’t have to read just the story on the page - you can also make up your own adaptations!


Personal Response
This book was interesting to read aloud to my five-year-old stepson and six-month-old son. They both might be a little too young for it (well, one DEFINITELY is!), because most of the enjoyment comes from seeing what was scratched out. The pictures are greatly embellished, though, so kids can really get a lot from looking at the illustrations and seeing what Alex added on to them. When reading aloud, my fiancé read the main story, and when a lot of a line was scratched out, I said “Instead of…(original text).” It was a little awkward to read that way, but we wanted to make sure my stepson realized the story had changed, and since he asks questions and points things out during storytime, it wasn’t the worst way to read aloud.
The five-year-old originally didn’t want to read this book - my fiancé and I pushed it on him a bit, because we wanted to see it since we saw Jon Scieszka in August 2014. We thought it sounded like a great book, but couldn’t find a copy anywhere until our last library visit. My stepson got into the book as we read it, and afterwards he played “Battle Bunny” for hours, as if he were a superhero!
I’m blown away by the creativity of this book! I can’t count how many times I, as an adult, have wished for a story to go just a little bit differently - and I’m sure kids feel the same with picture books! Now they get to see how one book and its illustrations can be easily transformed into something drastically different. Just make sure you remind the readers they can’t draw in books! Since it’s intended for older kids, there is probably little chance of this happening, but you can’t be too sure! But there is a way they can tell their own version of Birthday Bunny…


Connections & Activities
The authors, illustrator, and publishing company behind this book are so brilliant, they set up MyBirthdayBunny.com, where kids can go and explore the pages of Battle Bunny - and make their own version! You can download the book and print off the pages so kids can make their own versions of the story!
If you’re especially proud of your creation, you can email your work to the site and they’ll share them on the Battle Bunny Tumblr!


Reviews & Awards
Battle Bunny won the 2014 Gryphon Award. Kirkus Reviews says “[…] a great writing inspiration to use on old books headed for the bin.” School Library Journal gave it a starred review, saying“"This is a perfect book to give independent readers who are looking for something a little different. The unique layout and design will inspire creativity in readers.”

Posted by Allison at 8:45 PM No comments:

One of my favorite sites, The Bookworm Club, recently shared a helpful
infographic with tips on how to make storytimes rich for children.

I think I've mentioned before that I had next to no experience with kids before having my own baby, and while I've loved reading my whole life, I only read for myself. Even reading my own work aloud for classmates in my creative writing MFA programs was a little difficult.

Now I read aloud to my son almost every day, and I've learned a lot about how to do that. Though he's too young to ask questions or interrupt the story, over time I've found myself stopping to point out things in the pictures, or ask "What's going to happen?" as I struggle to turn the page while hanging on to his wiggly self.

My 5-year-old stepson has gotten more interested in books with each visit to our house, and I love picking books I think he'd like. After going to the zoo, for example, I picked Put Me In the Zoo by Robert Lopshire. It was one of my favorites as a girl, and I loved seeing my stepson hop around and show off what he could do with his spots. When I recently read Knuffle Bunny to him, he spoke like baby Trixie for days afterwards as he played.

I love seeing how a simple story can influence children! I look forward to reading with my son as he grows, because my stepson was so eager to help turn pages and point out things in the illustrations and ask questions and make guesses about what would happen next. When reading to children, you're actually sharing the stories because you're presenting it to them, interacting with them as they understand what's being read to them, and get to see them delight in the book's world.

But I digress! The Bookworm Club's guide to reading aloud is fantastic and I felt like it needed to be shared, so I'm posting the image here (with permission). Please also check out their post about the tips, and take some time to peruse their excellent site! 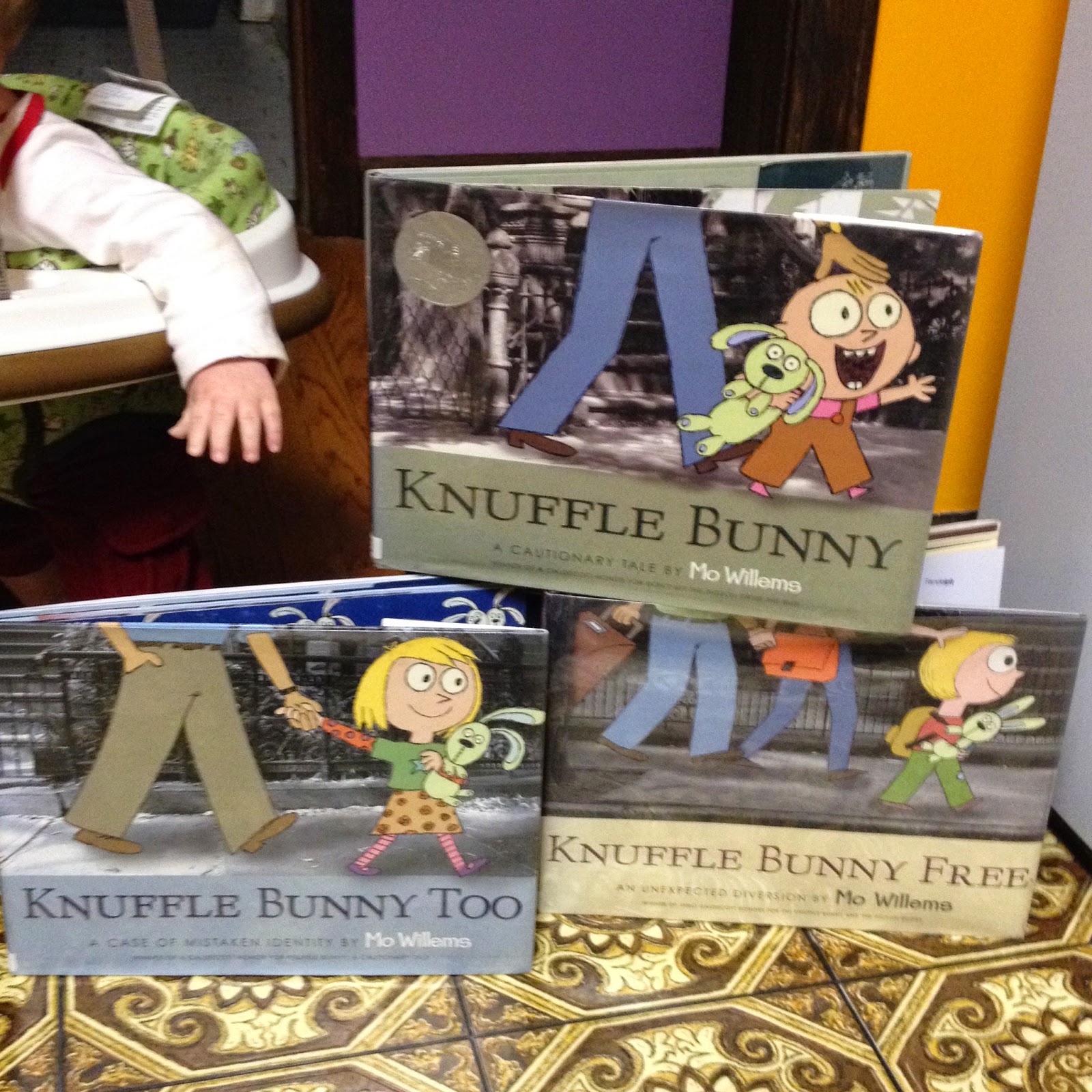 Reaching for his beloved books

Plot Summary
Knuffle Bunny: A Cautionary Tale.
Trixie lives in Brooklyn, NY with her mom and dad. She loves helping her dad run errands, like going to the Laundromat. Trixie always brings along her beloved Knuffle Bunny, but when he gets left behind, she can't find the words to tell her dad what happened, instead trying to make him understand "Aggle flaggle klabble!" Will Trixie's father understand her and help her find Knuffle Bunny again?
Knuffle Bunny Too: A Case of Mistaken Identity.
Trixie is excited to start school and show off Knuffle Bunny to all her friends. When she gets to class, she is upset to find Sonja has her own Knuffle Bunny! They fight and the teacher takes their bunnies away - will they get them back and become friends?
Knuffle Bunny Free: An Unexpected Diversion.
Trixie is older now, and her family is going to visit Oma and Opa in Holland. Knuffle Bunny comes along for the trip, but never makes it off the plane. Her grandparents try to make her happy with a replacement Knuffle Bunny, one that walks and dances and speaks (in Dutch). It’s cool, but it’s not Knuffle Bunny. Is Trixie mature enough to live without her best and oldest friend?


Critical Analysis
The Knuffle Bunny trilogy consists of three very unique books, with Willems drawing his illustrations on top of black and white photographs. This is something that might not be noticed by children, but it's such a pleasure for adults to look at, because there's so much to see in each photograph, and Willems' illustrations add even more to the pages. No detail gets by Willems - he adds his characters' shadows to make it seem like they actually belong in each picture. The font is perfect all around: it looks great with the drawing style, is laid out nicely on the page, and is big enough to children to see. Even those too young to read are pulled in by the words because, at least in the case of my son, the large, comic-looking font just begs to be touched! The page backgrounds are muted, solid colors to ensure the text and illustrations take center stage.


Personal Response
Until having a baby, my experience with contemporary picture books has been extremely limited to buying a book for my nephew's birthday and Christmas gifts. The children's lit course I took in undergrad mostly focused on the origins, the classics, and the retellings of fairy tales and more traditional children's literature. Literature for Children and Young Adults (5603), which I took the Fall 2014 semester, really opened my eyes to what's out there today. I'm sure I would have stumbled upon a lot of new books as I browsed the stacks with my son in mind, but the reading list for 5603 was impeccable; I'm keeping it to go back and read other suggestions from it as I have time.
All that is to say, I never read a Mo Willems books before last semester. The horrors! No, I don't think you're judging me - I literally mean, the horrors! I can't believe I was missing out on such treasures. I read Goldilocks and the Three Dinosaurs for class and fell in love with the whimsy of Willems, then checked out The Pigeon Needs a Bath when I saw it on display at the library. That reminded me that we need mo' Willems (I'm sorry, I had to!) in our lives. We picked out Knuffle Bunny and Knuffle Bunny Free without realizing it was a trilogy, so we requested Knuffle Bunny Too from another branch.
My 6-month-old seemed to love the illustrations, and when I read it aloud to my 5-year-old stepson, he had fun taking in every aspect of the pictures. He searched for Knuffle Bunny when he was lost, and tried to predict what would happen next based on the drawings. Days after we read them, he was still talking like Trixie in the first book: "Aggle flaggle klabble!"


Reviews & Awards
Knuffle Bunny and Knuffle Bunny Too are both Caldecott Honor books. All three books are New York Times bestsellers. The first book has been made into a short film and a musical, and stuffed Knuffle Bunnies are also available. Willems was a finalist for Illustrator of the Year during Children’s Book Week in 2011.
A starred review of Knuffle Bunny in School Library Journal raves, “Personalities are artfully created so that both parents and children will recognize themselves within these pages. A seamless and supremely satisfying presentation of art and text.” About Knuffle Bunny Free, the same source says “Willems once again conveys a range of emotions through limited text and outstanding illustrations. His sensitivity to children's needs allows the humor to come through without devaluing the feelings. […] This one is a must-have.” 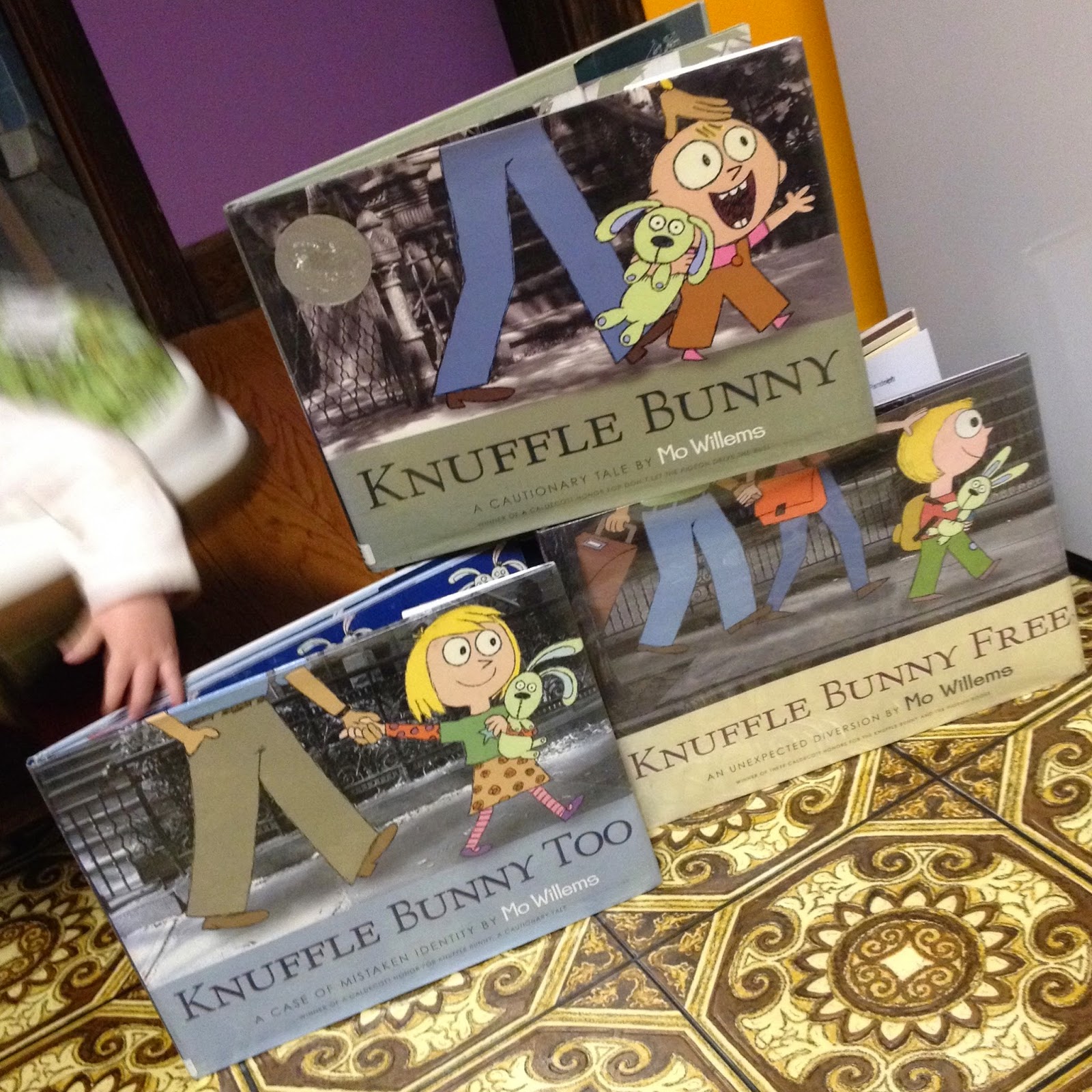 Right before they came tumblin' down!
Posted by Allison at 5:41 PM No comments: