Goldilocks and the Three Dinosaurs 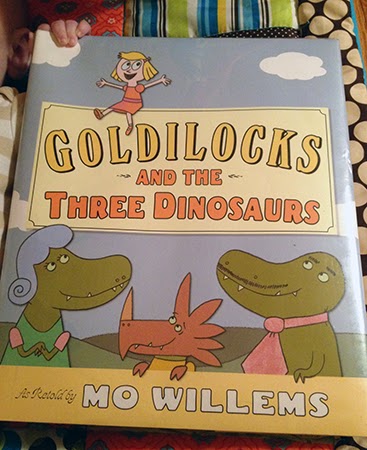 Plot Summary
Do you think you know all about the antics of Goldilocks? The three dinosaurs certainly think so. Papa Dinosaur, Mama Dinosaur, and no, not the Baby Dinosaur you might be expecting, but rather some other Dinosaur who happens to be visiting from Norway, decide to rig up their house so it is just so. They make it quite clear when they leave the house, but continually reassure everyone involved - readers included! - that they are not hiding in the woods, waiting for a trespasser. Goldilocks comes by the house and, true to her style, goes right in. She tries each pudding, then searches for a place to sit. It is then she realizes everything in this house is big. Much too big for bears. Will Goldilocks find out who lives in the house before they find her?


Critical Analysis
Mo Willems lets his fantastic sense of humor shine in this twist on a favorite fairy tale. He pulls the reader into the story with his simple, clean illustrations, and makes them comfortable by letting them in on the joke. Though I say his illustrations are “simple,” that doesn’t mean they’re lacking, simply that no page is too crammed with artistic elements. He outlines the characters with what looks like a black crayon, though the other colors are smooth and vibrant. He adds a bit of shadow to the characters, which helps them pop off the page. Willems shows some humor in his drawing style as well, by adding homages to his other works in the background of some scenes.
Willems uses a gentle dose of anthropomorphism to make his dinosaurs more relatable to the reader, especially those who are already familiar with Goldilocks’ mischief. Throughout the book, the dinosaurs seem a little devious, setting traps for the little girl, but they also seem like creatures children would want to be friends with. Besides twisting the well-known fairy tale, Willems also turns it more into a fable by ending the story with morals (however questionable those may be…).


Personal Response
I was smiling as soon as I opened Goldilocks and the Three Dinosaurs and saw the endpapers, and was thrilled that Willems kept the humor going through the whole story. The illustrations looked like they could easily be animated into a cartoon - which is something I’d love to see! I really liked the wink-wink-nudge-nudge type of humor Willems employed in this book, and am curious to see if that’s his style in other books as well. I feel like it’s hard to mess up a fractured fairy tale because there’s so much freedom to make them silly, but Willems hit the nail on the head with this one. Though the jokes are over his head, I love that my 3-month-old son has only heard fractured fairy tales so far - none of the classics, all of the ridiculousness!


Reviews & Awards
In a starred review, School Library Journal notes, "This is pure Mo Willems, from the many visual gags in the cleanly drawn illustrations and the tight, tongue-in-cheek story line to the endpapers, decorated with dozens of hilarious crossed-out title possibilities." Many children's book are geared only towards children, and some have jokes aimed at the adults reading the story aloud. Willems, however, is a perfect mix of the middle ground, as the jokes can be enjoyed by children and adults alike. It might sound corny, but his books bring readers together by bridging the gap in ages.
Awards and honors earned by Mo Willems’ Goldilocks and the Three Dinosaurs include: Publishers Weekly Best Children’s Books of 2012, Picture Books; School Library Journal Best Children’s Books 2012, Picture Books; 2013 Irma Black Award Finalist; Los Angeles Public Library Best of 2012 Children’s Books; ALSC 2013 Notable Children’s Books, Younger Readers; 2013 Sid Fleischman Humor Award Winner; IRA Children’s Choices, Beginning Readers, 2013.


Connections & Activities
Readers will love holding this book on their lap and turning the pages at their own pace, because there is much to be explored in each illustration. Because of the book’s whimsical sense of humor, it inspires lots of fun activities.
- Find the references to Willems’ other works within the illustrations. If the reader doesn’t know any of his other books, it’s a good opportunity to make them eager to read more!
- Pause after each page and ask what might happen next. Children who know the more traditional version of Goldilocks might be surprised at the turn of events in this version!
- The endpapers show that Willems went through quite a few ideas before settling on dinosaurs. Examples include Goldilocks and the Three Naked Mole Rats or Goldilocks and the Three-Piece Band. Have the readers pick a few of their favorites and brainstorm about how that version of the story might go! If time allows, you can expand this project into a storytelling event, or have the children draw the characters for their own book.