Anansi and the Magic Stick 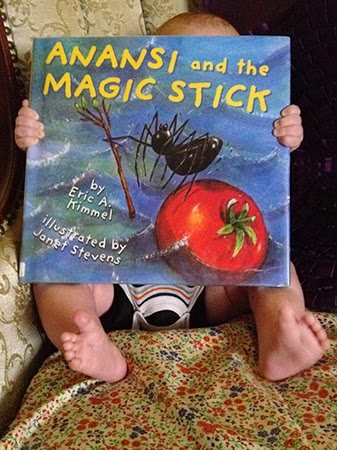 Anansi the spider is always getting into mischief. This time, he’s too lazy to do any work. While his neighbors clean their houses and take care of their gardens, Anansi sleeps. After the neighbors badmouth Anansi, he leaves to find a more peaceful place to sleep think! He sees the Hyena is also sleeping, but his house and garden look wonderful. Anansi hides to find out Hyena’s secret. Soon enough, Hyena wakes up and says the magic words: “Hocus-pocus, Magic Stick. Sweep this dust up. Quick, quick, quick!” The stick does as it’s told, and as soon as Hyena goes inside, Anansi runs home with the stick. He has it clean up his house and garden, but falls asleep as the stick is watering. Anansi told the stick “Don’t stop!” and never woke up to speak the magic words, so the garden becomes flooded. The water becomes a stream, then a river, and all of the neighborhood is floating away. By the time Anansi wakes up, the flood is out of control, and he can’t remember the magic words! Will he be able to stop the water? More importantly, will Anansi ever learn his lesson?

Every page of this book is beautifully illustrated, including the end papers and the author’s pictures! The drawings seem somewhat traditional: the animals are anthropomorphized, but they are portrayed realistically, instead of as cartoon characters. Even though they look realistic, the animals are vividly colored and have a lot of personality shining through. “Steven’s comic creatures with their surprised expressions add kid appeal,” says Publishers Weekly.
Illustrations cover nearly every page, with small blocks of text that encourage exploration of the art in between sentences. The sentences themselves look artistic, with creative spacing across pages, and bold, larger fonts to stress certain things, like when the animals are “working working working” and how the river was “a stream, then a flood, then a mighty river.”
The repetition of the Magic Stick’s rhyme, and the gibberish quality of the spell to make it stop, makes this a fun story to read aloud. This playfulness with the fonts, along with the bright illustrations, is a nice spin on a traditional tale, updating it for younger children to enjoy it now, while still learning lessons along with, er… thanks to Anansi.

I remember loving traditional tales as a child because I always thought the lesson learned was fun (I know, I know - I’m a nerd!). When I had to read it this time, however, I found I was almost dreading it, just because it seemed, well, a little boring. The cover seemed kind of plain, and I had just read a silly book, The True Story of the 3 Little Pigs. I was relieved to open the book and find such colorful illustrations, and it seemed more appealing since the drawings covered the majority of every page. I think illustrations are important for traditional tales, because the tales are so wonderful to read aloud and be heard - that means having interesting stuff to look at will pull the children in to the story even more. I also think the silliness of the spells to start and stop the Magic Stick are fun to read aloud, especially when the reader is expressive and stumbles over the forgotten spell with Anansi towards the end. The reader can also speak the animals’ lines in what their voices would sound like, with Hyena’s laugh and Lion’s roar.

Kirkus Reviews says, “Children will delight in Anasi’s escapades as he annoys his neighbors and learns how to control the stick. This is [Kimmel and Stevens’s] fourth Anansi collaboration; has the tricky spider learned his lesson this time? Let's hope not-his stories are too amusing.”
”This tale has a more traditional ring to it than Kimmel and Stevens’s Anansi and the Talking Melon, but whimsical illustrations add a modern-day appearance. The art has a softer focus than in Talking Melon but the same bright colors fill the pages, and the whole adds up to an enjoyable offering that is clever, funny, surprising, and traditional all at once.” from School Library Journal.


Read it for yourself!