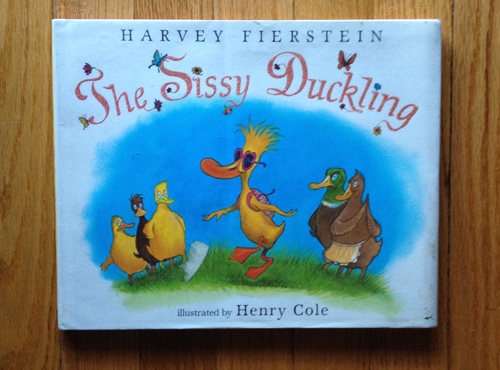 Judging this book on title alone, I wasn't that surprised it was banned. Except I kind of thought it had been banned because it encouraged name-calling, or something along those lines. I can't really think of an instance where "sissy" isn't a derogatory term.

In reality, this book seems ahead of its time. The "boy" duckling doesn't like doing stereotypical boy things, and he's sick of being teased, so he runs away. He wants to live alone so he can be true to himself. His father disowns him, which makes it a tough book to read, but it tells it how it is with no holds barred. I think that goes really far - with adults and kids. I really liked reading it (I've been on an LGBT YA kick lately), and it made me tear up at the end.

The Sissy Duckling was banned because of "gay positive themes". It shows a boy who isn't a "typical" boy being true to himself, yes, but shouldn't we encourage that no matter what the platform is? I don't think this book should be banned, of course; instead I think it should be brought into the spotlight more! It is a positive book, and we need to start that message for kids as young as possible.
Posted by Unknown at 9:25 AM