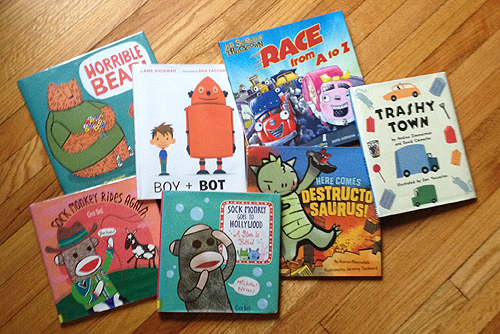 Horrible Bear! by Ame Dyckman, illustrated by Zachariah OHora. This book is based around accidents and blame and misunderstandings. Zachariah Ohora's illustrations are brilliant; we loved The Not So Quiet Library, and bold illustrations are clearly his trademark since they appear here as well.

Boy + Bot by Ame Dyckman, illustrated by Dan Yaccarino. Another Ame Dyckman, and another Dan Yaccarino (from last week: Doug Unplugged). This one was a really sweet book about a boy who meets a robot and becomes friends with him, until the robot's switch is accidentally hit and he turns off. The boy takes care of the robot until bedtime, when the robot comes to and thinks the boy has been deactivated. Very cute story and illustrations.

Jon Scieszka's Trucktown: Race From A to Z by David Shannon, Loren Long, and David Gordon. My son is learning the alphabet (he knows it all except H!) and loves trucks, and loved the other Trucktown book we read, so I had to grab this one from the library for him. He liked it a lot, but more for the truck characters than the alphabet. (I liked the story in the first Trucktown book better, myself.)

Trashy Town by Andrea Zimmerman and David Clemesha, illustrated by Dan Yaccarino. This is a book we've read before, but my son is so obsessed with garbage trucks that it was time to read it again. We're also on a Dan Yaccarino kick, if you can't tell... This rhyming book is really cute, and it's easy for kids to remember the refrain and say it along with you - or at least say "NO!" when you ask if the garbage truck is full. My son has asked for this one again and again.

Sock Monkey Rides Again by Cece Bell. I loved El Deafo, and my son and I both liked I Yam a Donkey too, so I wanted to read more of Cece Bell's picture books. Sock Monkey is incredibly cute, and my son and I loved the story about how he was going to break into movies with his own starring role! (Sock Monkey was already, of course, a famous actor, even though he only played small supporting roles.) As a bonus, Sock Monkey is a really accessible idea for a character; we had several small sock monkeys around that my son liked holding while we read the story (and for days after).

Sock Monkey Goes to Hollywood: A Star is Bathed by Cece Bell. Sock Monkey is nominated for an award, but he finds out that all nominees have to show up CLEAN! Sock Monkey hates baths! They scare him! But with the help of his friends, he gets all cleaned up and goes to the awards show - will he win?

Here Comes Destructosaurus by Aaron Reynolds, illustrated by Jeremy Tankard. The whole family loved this cute, witty book. Destructosaurus is trashing the whole town, burping fire everywhere, and not listening to the reader, who is trying to keep him in line. When the reader finds out Destructosaurus was just throwing a tantrum because he couldn't find his teddy, the tone changes...but so does the terrifying main character!
Posted by Unknown at 7:25 PM