Keep Her by Leora Krygier

Keep Her is a book about the arts, about adoption, about love, and about finding yourself. But it's hard to pick up on all of those themes, because they're seamlessly ingrained into the story. It's not until after you finish the book, after you think about it on and off and on for days, that you realize what you read. 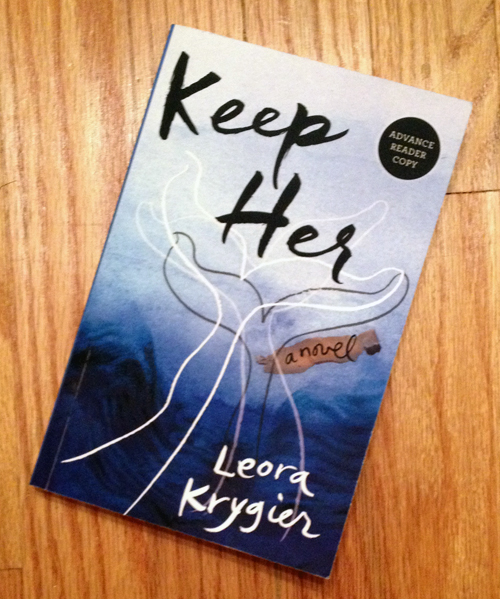 And that's good. I think that's how this book should be digested. Because when you're reading it, you're just reading it. It starts a little slow, and you don't feel very connected to the characters. It's like real life, in that you're drawn to them for some reason, but you can't put your finger on why. And you learn more about them, bit by bit by bit, but you never fully understand them.

Initially, I didn't like this. I usually love knowing characters as well as I know myself. But about halfway into the book, I realized that this method of showing was important. It told me more about the characters than just telling could do. So I began to appreciate it. And hopefully, knowing this ahead of time, you'll appreciate this book from the beginning, as it should be.

Maddie makes collages out of bits and pieces of other people's lives, and that's how she finds meaning in her own. Being adopted, she doesn't really feel confident in who she is. She wants to go to art school in New York, but starts doubting her talent, even though her acceptance should tell her all she needs.

In a freak flood, she meets Aiden, a boy who lives for the sea for many different reasons. Their paths cross and the occurrence seems like an accident, but it guides her on a path that needs to be taken. Based on what happened to her in the flood, Maddie takes a course in emergency response. She learns from Aiden about his time on a boat. And she learns more than she wants to about life and love and sacrifice.

This book is one that's hard to summarize in a review, because you don't want to give too much away. Peeling away the layers along with Maddie is one of the best parts of the story. This is one of those books where, when I got to the end, I was in disbelief, until I flipped back to the front and re-read the sentences and that deep, cool feeling of understanding washed over me. The ending was on my mind for days and days.

The ending made me reach out to the author and ask her what inspired her to write this book, because you can tell it came from a deep, personal place.


"I first started writing this Girl Meets Boy story, Coming of Age story while sitting at my local Starbucks. I began thinking about Starbuck himself, the hero character in Herman Melville's classic Moby Dick. It led me to reread Moby Dick, which in all honesty, was not an easy read, but certainly got me thinking about oceans, whales and the environment. In my research I also came across the true story of a  Greenpeace 2008 mission to save whales, and it all clicked for me. I knew I had to include this backstory in my novel.

I also wanted to write a book which hopefully (and not I hope in a preachy way) inspires young people to take action in whatever way feels good to them, whether for their family, their community, the environment or simply to further their own goals and dreams."

Since finishing this book, I've recommended it to so many people - including all of you. It comes out TODAY, so pick up your copy!

Disclaimer: This book was sent to me by the author for free, in exchange for an honest review.
Posted by Unknown at 6:40 AM