This week was a crazy book week, because we splurged at the bookstore on Sunday (we rarely ever buy new books, preferring to use the library or buy used when we do buy), and I kept finding books to bring home from work! I think we read a couple more than I'm including here, but oh well - I'm sure we'll re-read them this week and feature them in next week's post! 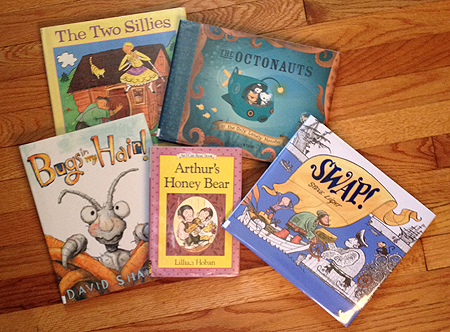 The Two Sillies by Mary Ann Hoberman. My husband originally read this to my son a few weeks ago, but they both thought I would like it, so they put it aside for me to read. It's a fun, silly book (who would have guessed?) about a woman who wants a pet cat, but doesn't understand everything her friend is telling her to do in order to get the cat. The rhyme scheme makes this book even more whimsical.

The Octonauts and the Only Lonely Monster by Meowmi. My son loves the Octonauts TV show, but we didn't know it was based on a book series until our Instagram friend @smashingkidreads shared a photo of the books. We have one in our library system, so I snatched it up one day for us to share. It's a really cute book, a little less detailed than the show (which shares a lot of information about about the animal featured) but still so enjoyable. We will definitely have to find (or buy!) the others.

Bugs in My Hair by David Shannon. My son is pretty into bugs... meaning he sees one, says "Ew, spider!" and "Gwoss" once it's dead (or ushered outside). He picked this book based on the cover alone, and I didn't think about it, but of course it's about lice! It was still an interesting read, and definitely a great book to read when it's about that time that kids encounter lice. This might be one we re-read...

Arthur's Honey Bear by Lillian Hoban. My son has a stuffed bear he named Honey Bear, and I loved Arthur as a kid (maybe I still do...), so I had to check this book out from the library. It's a little longer than we usually read, so I don't know that my son really followed all of it, but it was a sweet, enjoyable book about Arthur battling with himself about growing up or keeping what he loves.

Swap by Steve Light. The illustrations were the best part of this book - gorgeous! My son had more fun pointing at the pirates on each page, asking "Whos dat?" than looking at the pictures, so I snuck it away with me after. It's fun to see what was swapped on each page, and find the elements that the pirates still had left, plus the new items they swapped for. Probably better for slightly older kids who can appreciate doing that part of the "reading" with you, so this is one we'll revisit in the future.
Posted by Unknown at 9:30 PM