A man and his wife invite a couple to their home for the weekend to play bridge. The wife doesn't like the couple, and wants to bug their room to listen in to their conversations and activities. The man goes along with her idea, because it's easier than fighting. The couple arrives, and they all stay up late playing really good games of bridge. When they go back to their rooms, the man and wife listen in to the couple as they talk and get ready for bed. They realize that the other couple has a very detailed and polished system for cheating. The wife thinks it's brilliant and wants to copy it to do with her husband when they play.

The premise was slightly different - the woman is very rich, and this is her third husband. He doesn't work, but listens to music all day and is good with sound systems. She says she's bored and doesn't want the couple to come this weekend, but they're already on their way, so she wants to have fun with them. She bribes her husband to wire their room - he really doesn't want to, but she threatens him and says her second husband is working elsewhere as a salesman, and that threat pushes the man to do as she wishes. The rest of the show is the same as the story.
Posted by Allison at 7:24 AM No comments:

A man comes home and finds his roommate stuck in bed, unmoving, because of a venomous snake that crawled onto his stomach and fell asleep. The suspense is interesting and unique, with the ticking timebomb of the sleeping snake, being quiet and motionless to not wake him up, and trying to figure out what to do about the whole predicament. The man gets a knife ready so he can cut the bite and suck out the poison. He calls a doctor who brings a somewhat ineffective serum, but they try anyway. After using chloroform to keep the snake sleepy, they pull the sheet back and find nothing! It's implied that the roommate imagined it all, possibly due to PTSD.

The episode was similar to the story, though I don't remember if the man brought a woman home. I don't think he did, because later in the episode she steals the doctor's car, and I don't recall that from the story. I think she was added into the episode to make it more dramatic. The bulk of the episode is the same as the story, with the added aspect of the woman hiding in the kitchen so the roommate and doctor don't see her and tarnish her reputation. After the sheet is pulled back and there's no snake, the doctor asks the man if the roommate might have imagined it all. When the doctor sees his car is gone, stolen by the woman brought home, he gets angry. The man tries to calm him down and says he knows where his car is, and that he'll take him there. After they leave, the roommate gets up and goes to the liquor cabinet. He wants something strong to take the edge off his anxiety from the snake. He reaches for a bottle and the snake coils around his wrist and bites him. He dies. I loved this ending so much more than the story, though I like being able to compare them both, because I think it makes the episode's twist stand out that much more.
Posted by Allison at 9:21 AM No comments:

Learning How to Move Plot Along from TV Shows

One of my biggest problems with fiction writing has always been the plot. I have no problem creating characters and putting them in certain situations, but I often have trouble raising the stakes from there. Or I have trouble getting them out of problems I've created for them.

I've been reading less lately, which is not the best thing to admit on a book blog, but I'm happy to announce the shows I've been binging on Netflix has great plots that move right along and keep me hooked (hence the binging). 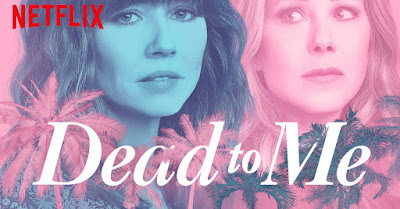 First up was Dead to Me on Netflix, at the recommendation of some coworkers. The concept was compelling enough, but the secrets revealed towards the end of each episode made for perfect cliffhangers. I know cliffhangers are necessary for shows, especially season finales, and sometimes for book chapters. But cliffhangers can be well done, or they can be so overly dramatic that, when they're resolved, you feel like you were duped. Like when the resolution turns out to not be a major plot point, but just a fake-out. And I think there were one or two of those in this show, but overall I felt like the use of suspense and slowly letting the viewer learn secrets was perfectly done. The season finale was also a nice balance of suspense, but believable events.

I recently saw that there will be a second season, though no date has been set yet. I'm eager to see what happens - and if you haven't seen the show yet, you have time to catch up before anything new is out!

After finishing Dead to Me and wanting more, More, MORE!, I turned to Good Girls. 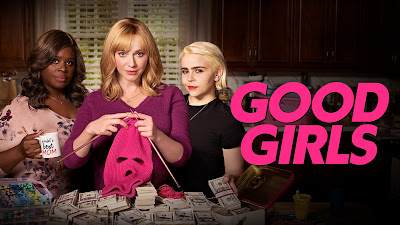 Viewing difficulties aside, this show is amazing. It's a little more over the top to me - it's somewhat realistic, but three women planning a major robbery and getting away with it (to the point I've seen, anyway), is a little tough for me to believe just because there were so many witnesses and secrets coming out. Once the gang gets involved, things get a little more unbelievable for me, but I love the show so much I'm more than happy to suspend my disbelief and escape into their crazy world for a binge.

I love the balance of humor, crime, and mystery, which makes me think of Sue Grafton's Kinsey Milhone series or the early books in Janet Evanovich's Stephanie Plum series. I like serious dramas sometimes, but the humor in Good Girls is perfectly timed and dry, and always elicits a genuine laugh from me. I love humor and comedy, period, and have typically attempted to use it in my own writing, but felt like it was hard to pick up on unless someone shared my sense of humor. This show helps me see that it's always worth adding humor, and if someone gets it, they get it. If not, it's just over their heads - it doesn't detract from anything if it's well done.

Both of these shows have been teaching me a lot about what a good plot is made up of, and how to create one without going over the top into unbelievable territory, or being underwhelming with a slow moving story. And while reading definitely teaches me all of these things, too, I love watching quality shows that help me become a better writer when I'm not in a reading mood.
Posted by Allison at 9:29 AM No comments:

This episode was unique because there was no matching story in Collected Stories. The story is actually written by Robert Bloch, but since it was part of the series I still wanted to view it and see how it fit in. Dahl does introduce the story on film, as he does with his own.

The episode has a good, but fairly common concept, but of course with a nice twist. A pharmacist is having an affair with his wife's best friend. He and this woman act in local plays together, so no one seems suspicious of them. While this is going on, the wife is going to a weight loss clinic because he husband calls her a compulsive eater. She's often shown eaten candy hidden in her purse while he's at work all day. She hides the report cards from the weight loss clinic, but the pharmacist knows where she hides them and always checks - she's not losing weight. He's frustrated with her, and the mistress is frustrated with their relationship. She tells the pharmacist he needs to leave his wife, but he's reluctant to change anything.

The best friend/mistress goes to visit the wife and plants seeds that the husband is cheating on her. The wife gets mad and says she'll take him for all he's worth. When the husband hears this, he and the mistress both agree he can't divorce her, because then they'd be poor. The mistress implies that he needs to kill her, and that he can since he's a pharmacist and has the knowledge of what might work, and has access to lots of pills.

The wife always asks the husband to bring home low calorie treats from the pharmacy, but one day he surprises her with a box of chocolates. He injected the chocolates with a drug and carefully covered his tracks so she'd eat them. She's happy but puts them aside for the night. The next morning, the mistress comes to the husband at work and says she's going away for awhile, and will only come back if the wife is out of the picture. When the pharmacist comes home his wife is stretched out on the couch; she looks dead, but wakes up when he leans over her. He asks if she ate the chocolates, and she excitedly tells him that she's realized she's not losing weight due to her own lack of willpower, and now she's determined to lose weight. He asks where the chocolates are, and she says she gave them to the best friend/mistress when she came over to say goodbye.
Posted by Allison at 8:02 AM No comments: