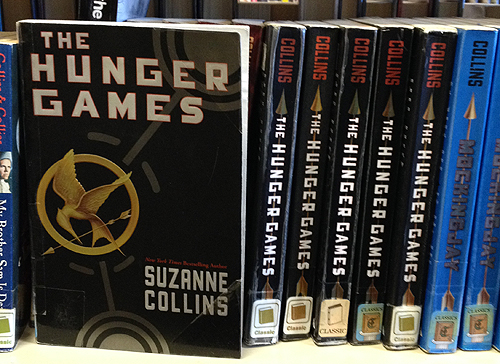 The Hunger Games is a dystopian series that features an annual event pitting young children from each of the twelve districts against each other in a fight to the death. The event is televised and is treated with the enthusiasm of our Olympics.

I read the Hunger Games series once all the books were released, because I’m really bad with series. I like to binge-read them, like binge-watching an entire TV series in a few marathon sessions. I really liked the series, with the exception of the second book, which just seemed like a placeholder. I saw the first movie but waited to see the rest until - you got it - they were all released and I could have a marathon. I keep planning to re-read the series and then re-watch the movies with everything fresh in my mind, but that hasn’t happened yet.

These books were banned for being too violent and unsuitable for the target age group. I have no problem with the reasoning, because these are violent books. I do disagree with the banning, of course. There is no reason to ever ban a book, just don’t read it! Don’t allow your kids to read it until they’re mature enough! Let everyone think independently, governing his or her own self (and children until they’re ready).
Posted by Unknown at 2:34 PM