On a previous blog, I would post monthly recaps of my favorite reads. I've decided to start doing it on this blog. Each post will have a variety of books I really enjoyed reading, whether they are children's or young adult, fiction or nonfiction, graphic or prose. 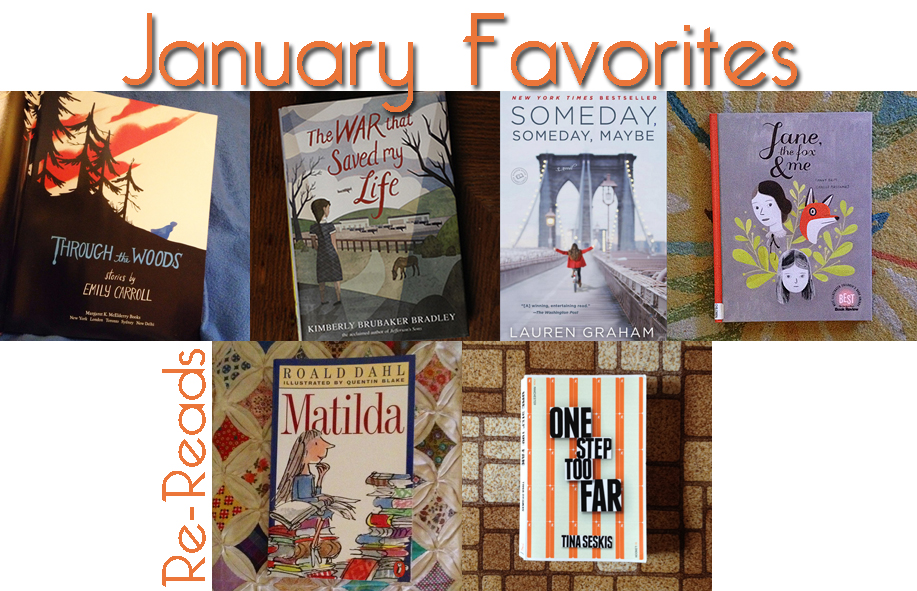 Through the Woods by Emily Carroll. I love this beautifully creepy collection of short stories. I wasn’t sure what to expect when I picked it up - I’d heard a lot of buzz about it, but thought it was just a fairy tale graphic novel. I was pleasantly surprised! The stories aren’t outright scary, but they’re delightfully unsettling, and quick and easy to read.

The War that Saved My Life by Kimberly Brubaker Bradley. Ada was born with a clubfoot, and her mother is ashamed of it. Because of that, Ada has never been out of the house, never learned anything, even though she is…or at least THINKS she is, 10 years old. Her little brother Jamie, on the other hand, is their mother’s favorite, and can play outside and attend school. As the war gets closer to London, Jamie is going to be sent to the country to stay safe. Ada sneaks out with Jamie, and they get on a train with the other children from London. People who live in the country are going to take in children until World War II is over, but what if no one wants Ada and Jamie? This was a very engrossing book, and I don’t usually enjoy historical fiction. The ending of this book is one of the most satisfying I’ve read in a long time, with a perfect last line. Highly recommended! Check out my video review: A Book a Minute.

Someday, Someday, Maybe by Lauren Graham. I love Lauren Graham, mostly as Lorelai Gilmore, so I was worried I was going to imagine her as the character in this book. Luckily the story is about Franny trying to make it as an actress in New York, and she’s silly and funny, so imagining Lauren Graham as the character totally fit. I love reading about people trying to make it as actors, so I loved this book. The overall resolution was a little obvious, but there were nods throughout the book that Graham knew what was going on, so it seemed a little less hokey. The ending itself was very well-written. I’d love to read more from her.

Jane, the Fox, and Me by Fanny Britt. This graphic novel is beautiful. Overall it looks very simple, with scratchy pencil drawings, but there are so many details in the images. The story is about a girl who used to have friends, until they abruptly turn on her and she is the class loner. It’s a story that’s been told over and over again (and I feel like most of the books I’ve read recently deal with this issue), but it’s well-done, and worth a read since it’s quick.


FAVORITE RE-READS
Matilda by Roald Dahl. I haven’t read this book since childhood, and I was delighted that it’s still just as entertaining to read as an adult! I’m a huge Roald Dahl fan so it was fun to start reading his works again. I read this right as I saw Matilda, Tim Minchin’s musical, so it was nice to compare the book to the musical (which actually stayed fairly true to the story)!

One Step Too Far by Tina Seskis. I previously read this in February 2013 and loved it - the review from my now-defunct blog is actually in the paperback version! I loved it just as much re-reading it now. I remembered the biggest plot point, but had forgotten a lot of the little twists along the way so it was a lot of fun to read again. Still highly recommend this book if you want a fast-paced, suspenseful read.