I read eighteen books this month - how did I find the time? I was so busy with schoolwork, my student association duties, and writing STEM programs for a rural library (more about that later). I'm only highlighting six of them, but you can find all my reviews on Goodreads. I'm thinking of doing an annual "Duds" post of books I read and then hated myself for reading, or books I started and couldn't finish. But let's not think about that type of book - let's focus on the great ones! 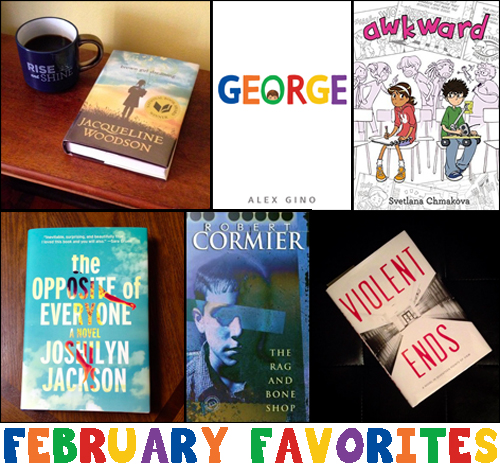 Brown Girl Dreaming by Jacqueline Woodson. I’m not a big poetry fan, but I LOVE verse novels. Woodson’s story of her childhood is so beautiful, with exquisite imagery and emotion. I think this is the first book I’ve ever read by her, but now I’m eager to read more. I highly recommend this book.

George by Alex Gino. This book tackles an interesting, contemporary issue, and it does so in a way that pretty much every age level can understand, which I really appreciate. As someone who was born female and identifies as female, I wish there were prequels and sequels to this book, because I am very curious to know how and when George realized she was a girl, not a boy, and I really want to see how things progress in her life. I think this is a great subject for younger books to be written about, and look forward to more in general, and from this particular author.

Awkward by Svetlana Chmakova. Middle grade graphic novel about a girl who is nervous about attending a new school, and fails to follow the rules she made for herself to fit in. Peppi joins the art club but can’t bring herself to speak up and share her ideas, and can’t bring herself to apologize to the boy she hurt on the first day. I love middle grade fiction, and when it's also in graphic novel form, it's so fun to read! You really get sucked into the story with the illustrations.

The Opposite of Everyone by Joshilyn Jackson. Joshilyn Jackson is one of my favorite authors, and her books keep getting better and better. Paula is a divorce lawyer who has had countless identities in the past, thanks to her mom, who lived wherever she could find a boyfriend. Paula has been sending her mother money every month to “make good” on something that happened in the past - and that’s been all the contact she’s had with her mother. When she finally gets something from her mother, it’s not what she expected, and she has to deal with her past catching up to her rich (literally) present.

The Rag and Bone Shop by Robert Cormier. Robert Cormier was writing dark YA fiction before it was mainstream, and his last book doesn’t disappoint. Jason is twelve years old when he’s questioned in the murder of his seven-year-old friend. Most of the story is in the suspense between the interrogator and Jason, but the ending has an excellent twist, then another twist, then a knife to the gut. Amazing!

Violent Ends by Shaun David Hutchinson. A collection of short stories about a school shooting, told in 17 different points of view by 17 different YA authors. A few of the stories fell flat, but most were amazing and interesting and emotional. Makes me want to re-read Columbine by Dave Cullen. This book has been popping in to my mind randomly since I read it, so I think that makes it a powerful read. I could see myself re-reading this one in a year or two.