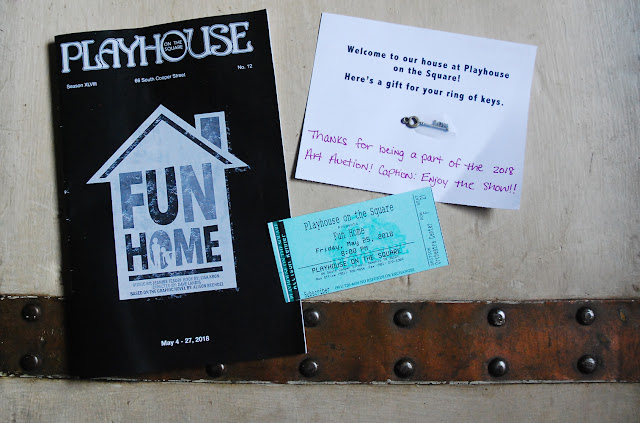 I was excited to see the Fun Home play because I wanted to see how a graphic memoir would translate to stage. I've see picture books as plays, and other "classics" like Peter Pan and Lord of the Flies. But for some reason it wrinkled my brain to imagine the little boxes of a graphic memoir on stage.

It wasn't until after I saw the play that I broke it down further in my mind and thought about how it was a graphic memoir - based on real life, so of course it would easily transfer to a play, because the action was done by real people in the first place.

I did love how it was done, though. The artist Alison Bechdel stood at her art table and watched the action of younger Alisons interacting with her family. After something happened, she would say "Caption..." and brainstorm possible explanations to put with her drawings.

I wasn't a huge fan of the songs. They were gorgeous but I think there was so much action and emotion to explore in the story itself without it being turned into a musical. That being said, the kids' song about the funeral home was definitely my favorite part of the night!
Posted by Allison at 12:09 PM