Everyone has something to say about Bird Box, the book, the movie, or both. So I'm going to assume that if you're reading this, you've read the book and seen the movie. If not, stop here because SPOILERS. I am going to be comparing the two, so be warned: no holds barred. 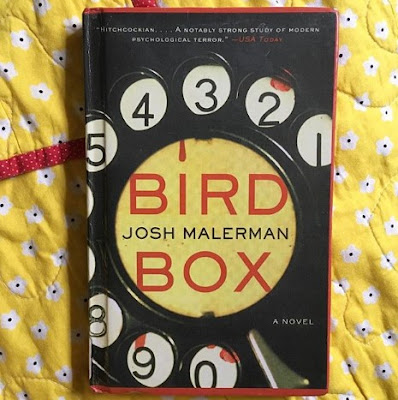 I read Bird Box after my friend, author Rachele Alpine, recommended it on an Instagram post about a different suspense novel I had just read. I put it on hold at the library and waited and waited because, as I said, everyone's reading it! I finally got my hands on it, started it, and... it dragged on. I was not immediately hooked, even though it was pretty suspenseful from the start. I just didn't feel a connection to it at first.

Once I got a fourth of the way in, I was hooked. I was reading as much as I could, during lunch breaks, before bed, during dinner... I had to find out what was going on. By the time I finished the book, I was blown away. The suspense had my heart pounding, and at no point did I think I had the story figured out. To me, that makes a great book.

I've read a lot of reviews of both the book and movie where people complain that you never find out what the cause is, and never get to see it in the movie. (I'm going to call it "the cause" throughout the post since I don't know what it is.) That didn't bother me. I kind of liked it not being identified, because being unknown makes it that much scarier. There's always the risk of showing the thing that's supposed to be scary, and it looks awful or fake or laughable. So I had no problem with that issue in the book and movie.

I watched the movie several weeks after finishing the book, but the story was still pretty clear in my mind. Obviously the movie was a lot different - it started quick, with the cause immediately taking over the area in question, instead of starting out pretty slowly in the book. I liked that a lot; I know there's room to expand things in writing, when visually you might have to jump right in to hook the viewer, but I think the book would have benefited from cutting directly to the chase.

Because the story started right at the action, some things changed about how Malorie's sister dies and how Malorie finds the safe house. Again, for the sake of cutting to the chase, it worked. I did like how Malorie had to get to the house in the book, though - it added nice level of suspense.

I loved seeing the characters in the house after reading about them. I definitely pictured them in different ways, but I liked how they were portrayed in the movie. All of the actors were a good fit, especially Malkovich as Douglas and Tom Hollander as Gary.

I've seen that people had a problem with Sandra Bullock being Malorie because she's "too old" which really bothers me because... really? Bullock is gorgeous and her look and attitude are perfect for Malorie. Also - it's a MOVIE. It's not real! She looks young so who cares how old she is in real life? But I digress. The screenwriters seemed to address her age slightly by making Tom younger than her. I can't remember if the book explicitly said, but I read it thinking Malorie was in her mid to late 20s and Tom was in his early 40s. I do think it was mentioned that he had a child who was killed by the cause, so maybe I just made him older in my mind. But that was something tweaked for the movie, too, and I think it worked. At one point it's mentioned that Malorie could have been Tom's babysitter, and it the ages had to be changed for Bullock and Rhodes to play these characters, then I'll accept it.

Speaking of Tom, I love how his story was changed for the movie. I loved the hint of a connection he and Malorie had in the book, so seeing it play out in the movie made me happy. This means his storyline had to change, because his death was different than in the book, but it was well done. The way Tom died in a shoot-out on film also helped add some suspense. That scene was definitely one where you hold your breath, and since it wasn't in the book, there was the added bonus of not knowing how it would play out.

The overall ending was the same, with Malorie and the kids arriving at a school for the blind, which I thought was a brilliant place for them to end up.

The only real "gripe" I had is about Gary. The way everything about him was shown in the book was very unsettling. Hollander did a great job making Gary creepy every time he was on screen, but I liked the added suspense in the book about "Frank" and the weird notebook and wondering what was "Frank" and what was really Gary. I think a lot of that was lost on film, but it might not have translated well to the screen.

I think everyone should read the book before the movie, of course, as I always would. It's always a lot of fun for me to compare the two, so I like reading what the author intended before seeing how it was changed for the movie.

Have you read the book and/or seen the movie? Share your thoughts in the comments!
Posted by Allison at 7:51 AM