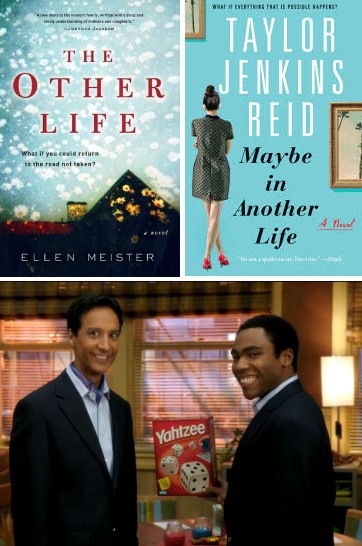 I first read The Other Life by Ellen Meister in 2011, shortly after it came out. I loved the concept and the writing, and loved Meister's other books when I read them later. But the overall concept of The Other Life stuck with me. Quinn finds a portal in her laundry room that allows her to travel between the life she used to live with an old boyfriend, and her current life with her husband and son. I've previously written about the book:


There is a supernatural element of the portals that take Quinn from her "real" life to her other life, but they are explained very well, and it was easy to picture the fissures and Quinn's travel without feeling like you'd been displaced into a sci-fi novel. The portals are logically discussed before the end of the book, and with the focus being more on people and relationships than the paranormal, I would say this book is literary fiction more so than being classified in any sub-genre.


I loved the concept because I always liked wondering what would happen if. I remember being a kid at my grandparents' house, spacing out and wondering what things would feel like if I didn't exist. I wouldn't even know what I was missing. Pretty strange thoughts for a seven-year-old, but I think that's where all my wondering started. Every time I've made a big decision relating to moves, jobs, schools, etc, I take a few minutes to imagine how each path might turn out. I know there's no way to really know how things will be until you're in the moment, but some of my decisions have been drastic enough (like being offered two jobs in dramatically different fields) that I can speculate.

Then the TV show Community rocked my world with "Remedial Chaos Theory", a remarkable episode of television, especially for a half-hour sitcom, that approaches the concept of parallel universes. Each time the dice are rolled, a different outcome plays, showing everyone all the things that could have possibly happened if one thing was changed.

I recently got hooked by Taylor Jenkins Reid, and loved her book Maybe In Another Life. It was more like The Other Life than "Remedial Chaos Theory", but it was really well done. Hannah has been feeling adrift in her life, unsure of everything from what career she should pursue to what city she should live in. When a friend convinces her to come back to her hometown of LA, Hannah is willing to try, partially because her high school boyfriend still lives there. On her first night back, Hannah goes to a bar with her friend to have a "welcome home!" party. In one universe, she goes home with her high school boyfriend to rekindle their romance. In the other, she goes home with the friend she's staying with. The chapters alternate from that point on, and the story develops so beautifully.

By the end, I did have a few questions about some of the "meant to be" aspects in one universe that didn't seem to completely apply in the other, so I need someone else to read this and talk to me about it! The last couple of chapters also had some of the same paragraphs copied and pasted - I know it's to show how things can be the same in both universes and still be "right" in each separate one, but as a reader, I don't want to see the exact same verbiage twice. I skimmed those paragraphs, but that was my only minor "issue" with the book.

Last year I started writing down some of my bigger decisions that led to one thing and could have gone a totally different way. It was my goal to write poems about what might have happened if I made the opposite choice. I haven't been able to find a good starting point, but reflecting on these books and episodes might be giving me the creative kick I need.
Posted by Allison at 8:40 AM