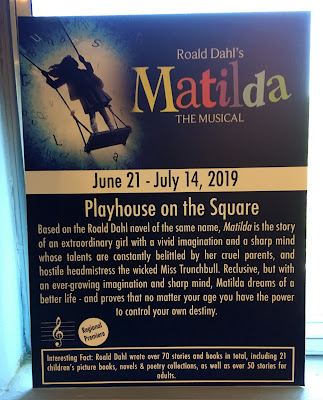 Last weekend I saw Matilda the Musical at Playhouse on the Square. I originally saw it at the Orpheum in January 2016, and fell in love!

About that performance, I said:


I was only halfway through [re-reading] the book when we went to see the play, but I liked it that way - I couldn't remember the original ending, so the play was still somewhat suspenseful.
[The play is] hard to review because... it's amazing. I would have gone to see it again the next night if I could have! The stage looks fantastic with all the letters and colors and blocks, and it pulls you right into Matilda's world. The actors are perfect in their roles. We saw a native Memphian play Matilda on opening night, so that was a nice perk!          The musical differs quite a bit in that Matilda's mother has a different hobby, which doesn't add much to the story, in my opinion. Matilda also tells an ongoing story she's made up, which is overly sentimental and also doesn't add much to the story, especially since Miss Honey's backstory is explained so concisely in the book. But I am a huge Tim Minchin fan, so I appreciate how these divergent storylines help develop the musical side of the story. Tim Minchin's songs are very clever and add jokes and wit to the story. 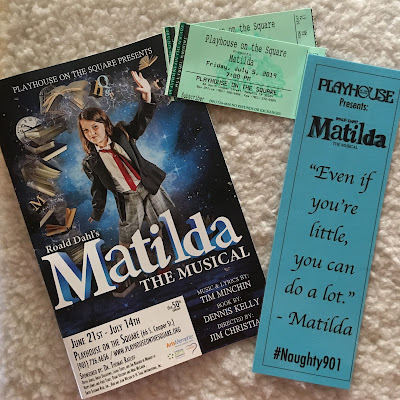 Besides being excited to go with a group and show off my photography exhibit in the cafe lobby, I was excited to see how it was interpreted for the smaller stage at Playhouse. The set was pared down, of course, and the letters were projected with lighting instead of being hung all over the stage. One thing I love about smaller theater performances is how much they do with limited sets and space. Using the doors and blocks for multiple purposes was really creative. The actors themselves were all fantastic, and there's nothing that makes me tear up faster than young locals blowing an audience away, and having that audience cheer like crazy. (I think there were lots of family and friends in the crowd that night, but still.)

Everyone I was with really loved the musical, and as someone who saw it years ago and has listened to the soundtrack countless times since, hearing the songs performed onstage was almost like seeing a band in concert. I loved hearing the music live again! 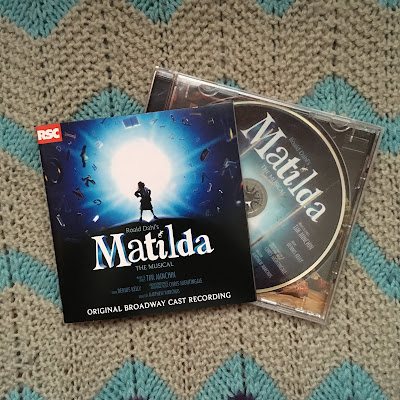 As far as I could tell, the show was sold out, and so many local businesses and families had wanted to sponsor the show that I hope it's performed here again before too long. I think it's great that it's based on a book, of course, but it seems like several plays each season are book-based at Playhouse. I think I mostly love how there were people of all ages there, and everyone seemed totally into the story and songs. I think Dahl is a timeless author, obviously (see: Author Study), and I've enjoyed some of the movies I've seen based on his work, but I do love that he's being updated and exposed to more people by having his stories transformed into plays and musicals.
Posted by Allison at 6:15 AM