Back to School in Verse

Last week I shared some of the back to school books I read with young students. This week, I'm going to share one book I was able to read with multiple grades. 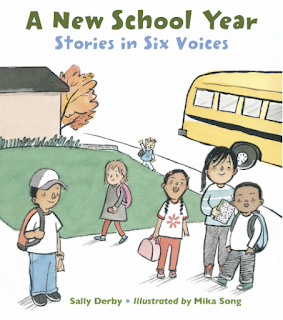 This book of poetry features diverse children starting kindergarten, first, second, third, fourth, and fifth grades. Each student has a poem from the Night Before, In the Morning, At School, and After School. Students have different living situations, different ethnicities, and different abilities and talents. I made copies of the poems and had students in each grade read them aloud.

For one Lower Elementary library class, I have a mix of first and second graders. After first graders read the poems, they shared words that described their night before and first day of school. Some second graders even chimed in with how they remember feeling the year before. The other Lower Elementary class has a mix of second and third grade students. It was interesting to hear their reactions to poems about students in other grades, in other schools (fictional, yes, but still relevant). It was wonderful to see how they could relate to these characters.

One Upper Elementary class has fourth and fifth graders, so we finished up the book with those poems, and then they wrote their own. For the group of 6th and 7th graders, I found an assortment of poems online. Several were about starting school and the end of summer, so we took turns reading those aloud before they wrote their own. A bonus pack of poems was about growth mindset, dreams, and pushing yourself to see what you could accomplish. These were read aloud and then also used as jumping off points for their own poems. I was so impressed at the variety of poetry style and the depth of emotion these students shared!
Posted by Allison at 7:00 AM