Pretty Funny for a Girl by Rebecca Elliot

Thanks to @kidlitexchange and @peachtreepublishing for a review copy of Pretty Funny for a Girl by @rebecca_elliot_author, which is out TODAY! Grab a copy if you’re ready to kick back with a hilarious YA novel. 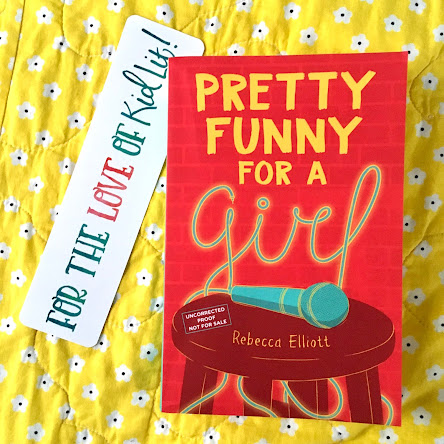 Haylah has always been a huge comedy nerd. She watches stand-up every night before bed, and writes down anything funny she can think of. She’s a pro at laughing off anyone who tries to put her down, which happens a LOT because Haylah is fat. So fat, everyone (even her friends) calls her Pig. But Haylah laughs it off and channels all her energy into her comedy. When Leo, a student a few years ahead of her, performs a stand-up routine in the school’s talent show, Haylah is smitten. She starts slipping funny notes into Leo’s locker, and is thrilled to be writing his jokes. Except Leo doesn’t acknowledge her in the halls at school, because he doesn’t want anyone to know he doesn’t write his own jokes. Haylah’s friends think she’s being taken advantage of, but Haylah just wants to write comedy! And kiss the boy, but hey, she doesn’t have to admit that part.

This was a quick, funny read that I really enjoyed. As something of a comedy nerd myself, I especially loved that Elliot actually wrote the stand-up bits in the book! One thing I wasn’t completely sold on was Haylah’s body image - she spends the first ¾ of the book focused on her weight, and everything implies that she is pretty big. I am ALL. FOR. THIS. I love seeing fat girls own it in YA books - I think this is so important for teens. But in the last ¼ of the book, it’s almost like Haylah’s weight melts off. She starts being described as “curvy” where the words previously used definitely implied she was bigger than that. I can understand her focusing more on a comedy show than her weight, but it was such a major part of the book that it seems disingenuous to just drop it like that. As an adult woman who still struggles with body image, I don’t buy that a teen would just shrug it off all of a sudden after it being such a major part of her life - and her comedy act! So one small strike against the overall story for me, but it was a funny book and I absolutely loved that a bigger girl who loves being funny is being spotlighted in a YA book - I wish I had this when I was younger!

Email ThisBlogThis!Share to TwitterShare to FacebookShare to Pinterest
Labels: body image, comedy, fat, pretty funny for a girl, rebecca elliot, stand-up, weight, ya, ya fiction, ya lit, ya novel