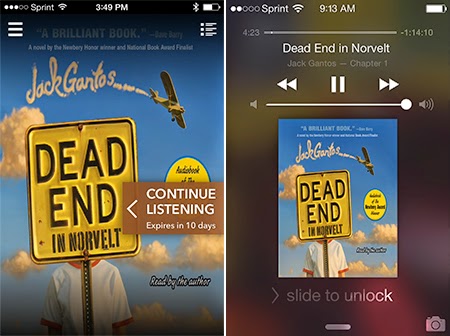 Listening to the audiobook on my phone, thanks to Overdrive via the Memphis Library
Plot Summary
In this semi-autobiographical, historical novel, Jack Gantos invites the reader to get into mischief all summer long… except there’s a hitch: Jack gets “grounded for life” by his mother! When an elderly neighbor needs his help typing obituaries, Jack’s mother releases him from his room to do a good deed. This good deed is more fun than Jack expected it to be, and he spends the summer learning to drive a car instead of a tractor, learn local history, and investigate deaths that make his nose bleed uncontrollably!


Critical Analysis
Character.
Jack Gantos is a fantastic narrator - both as a character in the story, and for the audiobook! His audible and written voice brings the past to life, inviting us to explore small town life in the summer of 1962. He gets into a lot of trouble because he loves reading - and reenacting! - history, instead of focusing on the present.

Plot.
This book is a fun mix of crazy fictional adventures and genuine history. It will probably be hard for children to tell what is true and what isn’t, because it was hard for me! But it is a fun, engaging story, and you learn history without realizing it. Gantos gives just enough information to draw the reader in, but stops short of making it seem like a history lesson. Since it’s such an easy, light-hearted book (despite all the blood!), readers will more than likely be curious enough about the history mentioned to research on their own!

Setting.
There’s something about a small town that seems timeless, and Norvelt, Pennsylvania is a small town. It’s great to hear how young Jack goes from driving a tractor, to driving a car, to decently driving a car in such a short span - only in a small town! Learning about how Norvelt was founded, and what values it was founded on, helps readers better envision the town, the citizens that inhabit it, and the era when all of this occurred.

Theme.
A boy getting in enough trouble to be “grounded for life” is the most timeless theme I can think of! Jack’s curiosity about history and the world around around him will certainly inspire contemporary readers to explore their own lives for story, and will more than likely inspire some historical research along the way.

Style.
This is a fun read, and it only helped things seem more cheerful (even with all the death!) to have the author reading it himself. The story was told the way you would share life stories with friends and family, and hearing the author use timely slang like “cheese-us-crust” only makes the audiobook experience more enjoyable.


Personal Response
I can sit and read for hours without moving, but I have a tough time focusing on audiobooks. Some of the tangents Jack goes off on in the book lost me in the audio format. It seemed like at least once a chapter he would go into great detail about a history book he was reading, or flashback to a previous event. These scenes might have only been a paragraph or two in the physical book, but in the audio book, they were a section where my mind would run off in its own direction. Overall, I feel like the story stuck with me more hearing the author tell it in his own voice, because I could hear the enthusiasm and playfulness of his true self come through in his characters.


Reviews & Awards
Dead End in Norvelt won a Newbery Medal and the Scott O’Dell Award for Historical Fiction. Jon Scieszka, a humorous children’s author, implores readers to pick up the book: “Nobody can tell a story like Jack Gantos can. And this is a story like no other. It’s funny. It’s thoughtful. It’s history. It’s weird. But you don’t need me to attempt to describe it. Get in there and start reading Gantos.” If that’s not endorsement enough, Horn Book gave it a starred review: “There’s more than laugh-out-loud gothic comedy here. This is a richly layered semi-autobiographical tale, an ode to a time and place, to history and the power of reading.”


Connections & Activities
Jack Gantos doesn’t let his Norvelt adventures end here! Students can read more in From Norvelt to Nowhere, ISBN 9780374379940. Note: this audiobook is also narrated by the author! I highly recommend listening to Gantos tell his story.


Read it for yourself!
Gantos, Jack. 2011. Dead End in Norvelt. Narrated by the author. New York: Farrar, Straus and Giroux. Audiobook.