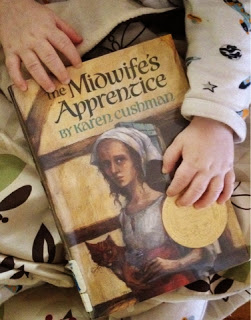 Fun fact: my son was delivered at home by a midwife!


Plot Summary
Brat sleeps in a pile of dung in the middle of a village in England. She doesn’t have family, education, or a way to make a living for herself. So when Jane the Midwife finds Brat, the girl goes with her willingly. Her mentor is not kind, but provides a place to live, meager meals, and the chance to learn a trade. In the fourteenth century, midwifery is a profession in high demand - wherever women were having babies, midwives were needed. Newly named Beetle attends births with Jane the Midwife, but has to stay outside because the midwife wants no competition. Beetle, however, is a clever girl, and peeks through windows to watch the midwife work her magic. But when it’s up to Beetle to deliver a baby by herself, will she be able to?


Critical Analysis
Characters.
Initially, Brat is hard to relate to. She lives in a vastly different time period, and has grown up differently than most people are familiar with. As the story goes on, and as her name changes, the reader becomes more involved with Beetle’s life and dreams. She wants to belong, to be cared for, to have a name. More specifically, she wants “a full belly, a contented heart, and a place in this world” (81) - something everyone can identify with.

Plot.
You don’t have to be a history buff to know that Cushman has done her research. She presents this story in an era where midwives were a necessity, and class didn’t matter - whether you could pay in gold, or pay in potatoes, you would be treated the same by the matter-of-fact midwife. The subject matter is presented very honestly, and might be better for older children who have an understanding of childbirth and hardships.

Setting.
The setting was described very vividly. Readers will have no problem envisioning the poor village where Beetle learns her trade, from the dung pile where she once slept, to the somewhat-isolated inn where she works.

Theme.
The overarching theme of this book is that every person has value. Beetle grew up poor and homeless, unable to care for herself, and that turns around completely by the end of the book. However, realizing she can be a midwife even if she has previously failed should a major turning point, but the most important part seems to be that Beetle is pretty underneath all the dirt. That theme is relevant today, of course, but I would have expected something more revolutionary from a historical book that tackles such a unique topic.

Style.
The language is a bit stilted, and might be hard for children to read on their own, or even understand when read aloud. It doesn’t hinder the story since it seems historically accurate, but it might prevent readers from diving right in to the book.


Personal Response
It was hard for me to get in this book. Part of me is still childish, judging books by their covers; this one doesn’t look too inviting. I read beyond my age level as a child, but it surprised me that this book is recommended for ages 8-12. (Though some reviews do specify ages 12 and up.) Even though I had a home birth attended by a midwife, I didn’t feel connected to this story until it started to turn around. The first two-thirds of the book were dark, and I felt like I could have easily put it down without wondering what happened to Beetle in the end. That being said, I’m glad I didn’t!


Reviews & Awards
This book won the Newbery Medal, and is an ALA Best Book for Young Adults, ALA Notable Book for Children, Booklist Editor’s Choice, Horn Book Fanfare Selection, Parents’ Choice Gold Award, and more. School Library Journal illuminates the book’s place perfectly: “Earthy humor, the foibles of humans both high and low, and a fascinating mix of superstition and genuinely helpful herbal remedies attached to childbirth make this a truly delightful introduction to a world seldom seen in children's literature.”