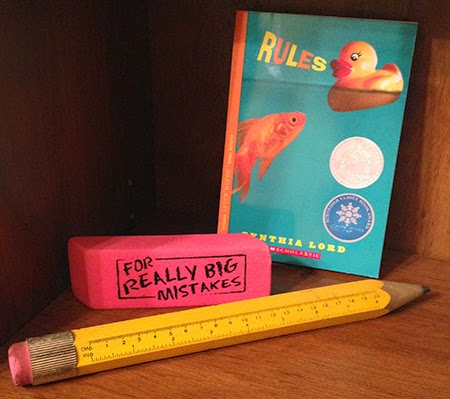 Plot Summary
Catherine is tired of her brother David being the center of the family, just because he has autism and needs more attention. Catherine keeps a list of rules in her notebook, just for her brother - rules about social conventions that seem basic for most people, but don’t come easy to David. When a new family moves into the house next door, Catherine is sure the girl is going to be her new best friend. But who would want to be friends with someone who has a brother as different as David? Catherine is determined to hide her family from her new neighbor, even as she grows closer to a boy who knows all about her brother. Can she balance her family and friends, while still being true to herself?


Critical Analysis
Character.
Catherine is a realistic twelve-year-old girl who wants to have a normal life, or maybe even a storybook-perfect life: the best friend living right next door, the brother who doesn’t embarrass her all the time, parents who pay attention to her. How she alternately loves and hates her brother is especially understandable; everyone with a sibling has felt this way, but it seems especially fragile when the sibling in question has a disability. I think the way Catherine thinks about and acts towards her brother will help young adults understand how to act towards people with disabilities, instead of just keeping their distance.

Plot.
Catherine is determined to live as normal a life as she can, and that starts with making the new girl next door her best friend. She’s tired of the boy on the corner making fun of her brother, but she’s torn between protecting David and distancing herself from him. Catherine is also trying to get attention from her parents, wanting to be noticed and appreciated even as she’s growing into a teenager. Everything is in a delicate balance, and she has to figure out how to handle it all and what type of person she wants to become.

Setting.
The setting is a small town, any town, or it might just seem that way because the story is told from Catherine’s point of view. Only a few places are noteworthy, like her house, the neighbor’s house, the bully on the corner, the video store (David’s favorite place), and David’s physical therapy. In my opinion, setting doesn’t play a huge role in this story, but it works that way because the characters step up and take center stage, as they should.

Theme.
Catherine wants to be carefree like the girls at her school, but with her brother being different, she can’t quite pull it off. She spends her time drawing and wishing her world didn’t have to revolve around David. When she goes with her mother and brother to physical therapy, she meets Jason, a boy who has more severe disabilities than David - yet she is immediately drawn to him. He values her art and how she understands him, and Catherine is able to see herself through his eyes, and realizes she has more to offer than other girls who might not have such varied life experiences. The theme is very subtle, but once it’s realized, I think it’s very powerful. Catherine standing up for her brother and Jason is very emotional, and gives me hope that children reading this will start accepting people with disabilities more widely than that population has experienced in the past.

Style.
The style of the book is casual and conversation, but there are great unique elements that really stand out. Catherine’s inner dialogue and thoughts are very strong, and I like how they often contradict what she says vocally. I also thought the way she conversed with Jason, using his communication book, was interesting because the author had to keep it simple, using a limited set of words to convey emotion, but still managed to add some humor.


Personal Response
I worked with adults with disabilities for several years, so I love finding books that address disabilities. I think it’s important for kids to understand that some people are different than them, yet still should be treated like everyone else. The book is definitely true to the feel of kids on the brink of becoming teenagers, but the element of knowing people with disabilities added a great emotional depth that was really powerful. I especially loved how Catherine’s relationship with Jason began and evolved. If anything, I think this book teaches patience, kindness, and acceptance.


Connections & Activities
Read more books with characters who have autism or Asperger’s to help expand your view of people with this disability.
The Al Capone series by Gennifer Choldenko
Anything But Typical by Nora Raleigh Baskin
The Curious Incident of the Dog in the Night-Time by Mark Haddon
Marcelo In The Real World by Francisco X. Stork
Mockingbird by Kathryn Erskine