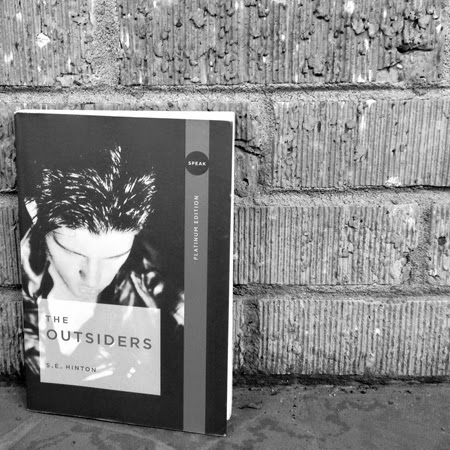 Plot Summary
Ponyboy’s parents died in a car crash, and now he lives with his older brothers Darrel and Sodapop. The boys are in a gang of Greasers, letting their hair grow long and picking fights with the clean-cut Socs (short for Socials). The fights get violent, and Johnny, the smallest Greaser, gets swept up in the moment as he tries to keep a Soc from drowning Ponyboy. The two youngest Greasers get scared of the consequences and run away, starting a domino effect of events that will affect the whole gang.


Personal Response
This is one of those books that all my friends had to read in high school, and I never did. Never had to, I mean - not that I skipped the assignment. And I’ll admit to skipping out on required reading! (Hemingway, I’m looking at you.) I heard a lot about this book, and it’s been referenced in everything pop culture, but I never read it. And honestly, now that I have… it wasn’t necessary to understand the references. The story was simple and has been redone and updated over time. It’s a simple story, and yes, it’s cool that the author, a girl!, wrote it when she was very young, but that’s been done throughout time, too.
To be fair, it isn’t a BAD book. I read it all the way through, fairly quickly, and when I was done, I was done. Maybe that was some of the issue with me - I love when books, characters, or their problems stick with you. And that didn’t happen here. If I had read it in high school, I might be more attached to it. But at this point, I’m just glad to have read it and marked it off the list of books I “should” read.