The Body of Christopher Creed 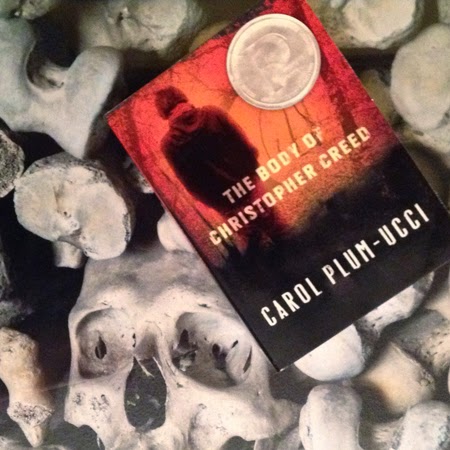 Plot Summary
Torey Adams has a pretty good life - he has two successful parents who are still married, he’s on the football team, and he’s the guitarist for a band. Christopher Creed is a boy he’s known all his life, but hardly knows at all. When Chris goes missing, everyone in town has their theory of what happened. Chris’ odd behavior has gotten him beat up over the years, even by Torey. The note Chris left behind names names - not of those who bullied him, but those who he was jealous of. Torey’s name is on that list, which makes him wonder why, and makes him think of what it was like to walk in Chris’ shoes.
Together with a girl from school, who is also Chris’ neighbor, Torey starts to put together the pieces. That’s a tough task when there’s no body - did Chris run away, or kill himself? Torey isn’t sure, but he’s determined to keep looking until he finds out.


Personal Response
I love disappearances, unsolved mysteries, and all that jazz. This book delivers all of that, plus a great lesson about having compassion for others. Torey used to beat up Chris Creed, but with the disappearance and seeing Creed’s mother, he develops an understanding about Chris’ actions and home life. This compassion overflows to other people in Torey’s life, but the lesson isn’t preachy or overwhelming. Sometimes books with an open ending leave me feeling unsettled, but the fact that this book doesn’t have a definite resolution really works for the story.


Connections & Activities
Check out the sequel! I can’t wait to get my hands on it. Following Christopher Creed by Carol Plum-Ucci