Just like my young adult post, my favorite adult books are just ones that I read this year, not ones that were published this year. My goal for 2016 is to read more current titles. 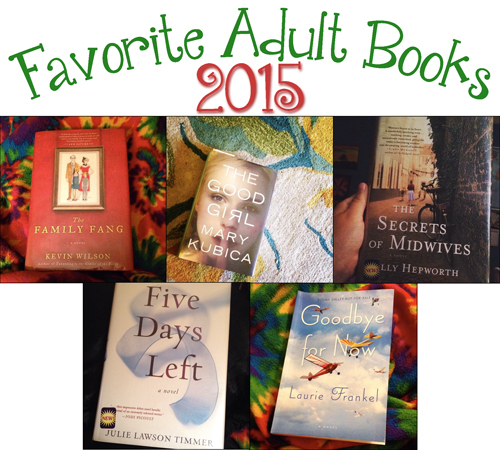 The Family Fang is a book about a family who performed a flash mob type of art before it was a sensation. As the children grow up, they get tired of the public hoaxes their parents conduct, and try to distance themselves from their past. When they fall on hard times, the adult children have no choice but to come back home, where their parents try to get them to participate in just one more act of public performance art. Kevin Wilson is an excellent writer, and though I didn't read it this year, I also highly recommend his collection of short stories, Tunneling to the Center of the Earth.

The Good Girl is a suspenseful book about a prominent judge's daughter being kidnapped. Because of the excellent suspense, I don't want to give too much away, but the twist at the end of this book is one of the most excellent I have ever read. And I say that as someone who was underwhelmed by Gone Girl, The Girl on the Train, and all the hype surrounding similar titles.

The Secrets of Midwives is told from the points of view of three generations of midwives: a grandmother, a mother, and a daughter. Despite having the same profession, the women are very different. When the daughter reveals that she is 30 weeks pregnant, other secrets start coming out. This book is very emotional, powerful, and well-written.

Five Days Left is a book about Mara, a woman with Huntington's disease, who wants to kill herself before the disease puts a strain on her family. She has five days left. Mara was adopted, and her daughter is adopted, so she spends a lot of time on a forum for nontraditional families. There, she befriends a man who is fostering a young boy. He wants to adopt the boy, but his pregnant wife is against the idea. He has five days left with the foster son he has grown to love. The concept of five days left creates a lot of suspense as the story is told, and it's interesting to see how the two different characters interact with each other.

Goodbye for Now is a book about how much living we do online, and how that can blur the lines of reality. I summarize this book, as well as Laurie Frankel's first novel, in a book tube video you can watch below.