Everyone raved about Russo’s debut novel, If I Was Your Girl, but it fell flat to me because it lacked emotion and realism. I thought Amanda had it too easy as passing, and the trans issues were glossed over. My thoughts on the lack of depth in If I Was Your Girl doesn’t make it a bad book, but I had hoped for more struggle, more reality, and more information that trans teens (or anyone, really) might need to know to understand this issue better. (You can read my full review here, so I don't hijack this review with something only semi-related.)

That being said, I definitely wanted to give Russo a second chance, so I was eager to read Birthday. And wow, did it deliver! 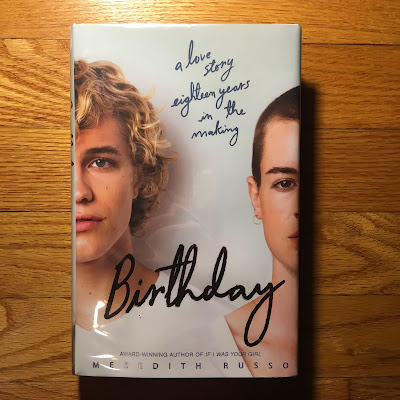 Eric and Morgan were born on the same day, and a freak September blizzard in their small Tennessee town left their families stranded in the hospital together for several days. They bonded and became close family friends, and Eric and Morgan became best friends. They celebrate their birthday together every year, and this book is told from their alternating points of view, only on their birthdays from the ages of fourteen to eighteen. Seeing just these glimpses into the lives of Eric and Morgan was enough to get a good story rounded out, with enough room to imagine what the characters are like during the rest of their lives.

Over time, Eric and Morgan's families grow apart. Morgan loses his mother to cancer and struggles with the aftermath. When Morgan quits the football team, Eric's father labels him a sissy and doesn't treat him like family anymore. When Eric joins the football team, he and Morgan start to grow apart.  There were so many layers to this story - family relationships, school struggles, self-loathing and self-acceptance, friendship, love. It wasn’t too much, and it was all well-done and balanced to create a realistic world with characters you can easily identify with and understand.

Eric and Morgan are such deep characters, and I loved getting to see inside of both of their heads and hearts. They both struggle with identity and self in such real ways, and I was so glad all of that was laid out on the page for readers. I highly recommend this book, and hope it gets as much, if not more, attention than Russo’s first book. It is well-deserved.
Posted by Allison at 6:22 AM