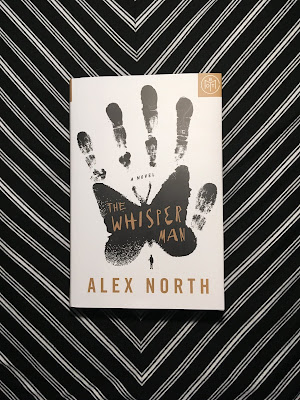 Backstory:
The Whisper Man by Alex North was my first selection from Book of the Month. This is totally a #bookstagrammademedoit type of thing. I've tried two different subscription boxes, years ago. One was a selection of local goods - food, crafts, coffee - that I really enjoyed, but got pretty pricey over time. The other was a young adult book club subscription. I was sent a YA book that had post-it notes marking certain pages, and small gifts wrapped up with the corresponding page number labeled on it. The idea was that it was an immersive experience - you're reading the book, then opening a gift that relates to what's happening in the story. It's a great concept, but I didn't enjoy many of the books, and the gifts were things I didn't really need or use, so I stopped that subscription as well.

Cue seeing The Whisper Man all over #bookstagram, with all the blurbs saying how creepy it is, how you shouldn't read it at night. I looked it up online to get my own copy, but it didn't release until August 20th, and this was the beginning of August when I was seeing it all over the internet. So I read more into everyone's posts, and saw that they were getting it from the Book of the Month subscription club. I found a code to get my first book for $10, and selected The Whisper Man.

It got to me a few days later, but I was finishing up one book, and had one that I needed to read to review. Once those were out of the way, I started The Whisper Man.

Plot:
Tom Kennedy's wife dies unexpectedly, so he moves his young son, Jake, to a new town for a fresh start. Jake had been pulling away from his dad since his mother's death, and while they had never been close, the distance bothered Tom. It also bothered Tom that Jake was talking to himself. Except... not to himself. Jake seemed convinced that a little girl was his friend and was always around, even when no one was with him. Jake has trouble at his new school, which adds to the stress Tom is feeling about the state of his life. Their new house is odd and unsettling, too. Tom is determined to find out the history of the house, and especially the mystery of the junk in the garage.

At the same time, the local police are investigating the latest kidnapping of a young boy. Twenty years ago there had been a string of related kidnappings, and the cops were sure they had arrested the correct man. He's been in jail since, but now another kidnapping has occurred. It could be a copycat, but some of the details were never released. The police realize that their suspicions of the killer having an accomplice might be true.

My Thoughts:
I enjoyed this book overall, but I had no problem reading it at night. It was creepy and unsettling, yes, mostly because the boys being kidnapped were approximately the same age as my son, so of course that might bother a person a bit. Some of the twists were pretty entertaining, but I do wish we had gotten more information about the killer who was in jail and the accomplice. I can't say too much without spoilers, but there was a lot that could be explored there, or perhaps better explained. I'm glad I read it, and I'm looking forward to more Book of the Month books, but I don't think this story lived up to the hype.
Posted by Allison at 6:44 AM