Lola Zola, a series for tweens 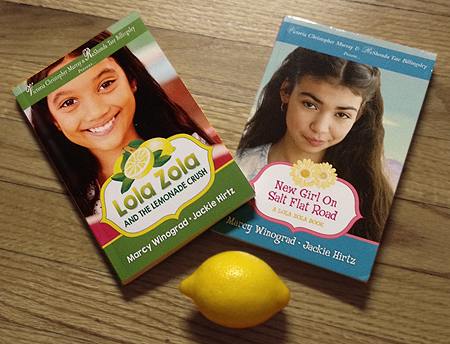 Plot Summary
Lola Zola and the Lemonade Crush: Lola Zola is understandably upset and confused when both of her parents are laid off from their jobs at the auto plant. She’s only eleven years old, but she feels the fate of her family resting on her shoulders, and she won’t let them drown in debt. Lola decides to start a lemonade stand in front of the house, enlisting her best friend Melanie to help. But after buying all the ingredients and treating her fair-skinned friend to a sun-blocking umbrella, Lola is out of money—and no one seems to like her lemonade that much, anyway. But Lola won’t give up. She finds a secret ingredient and engages in some covert marketing, and her business booms! Then Slime Bucket, an annoying boy from school, starts selling limo-nade from the trunk of his father’s limo, right across the street from Lola! Will her enemy ruin her business before Lola is able to save her family from bankruptcy?

New Girl on Salt Flat Road: Lola Zola begs her mom for a bra, just wanting to be like all the other girls in middle school, but her mom keeps saying Lola doesn’t need a bra yet. She wants her daughter to stay a child, while Lola is really to grow up! Especially when a new girl moves in, a girl that Lola and her best friend Melanie dub “Tween Queen Pauline” due to her gorgeous hair and curvy body. Zola feels like the chosen one when Pauline invites her to the mall to try on bikinis (even though Lola doesn’t fill hers out) and to a makeup party (even though Lola isn’t allowed to wear makeup). Unfortunately, this makes Melanie, Lola’s best friend, feel left out. But when Lola discovers that Pauline shoplifts and likes boys—including Lola’s crush!—she isn’t as sure that she wants to be Ms. Popularity.


Critical Analysis
Lola Zola is a great new series for tween girls. Lola has a huge personality, making the books fun even while they tackle issues like unemployment, alcoholism, and peer pressure. The characters in the books come off the page, even when they play minor roles. The books use a lot of slang, which will appeal to tween readers.
There are a few sections in New Girl on Salt Flat Road where the timeline jumps a bit from present time to flashbacks (sometimes just an earlier instance in the same day) that is confusingly worded, but overall the books are very accessible for tweens, written in their language—literally, in the case of current slang, but also written for their grade level.
Lola Zola is published by “Brown Girls Publishing” (which does NOT exclusively print African-American books OR African-American authors) and the character often laments about her wild hair, but otherwise nothing is explicitly stated about Lola’s race. Which doesn’t matter, of course, though the series seems to be about people of color (especially if you judge both books by their covers). This doesn’t detract from the story at all, but I think it would be a great opportunity to highlight a strong, bold girl of color - IF that is what the authors intended. Melanie, Lola’s best friend, is frequently mentioned as being pale and freckling in the sun, so it would be just as easy to slip in a few phrases about Lola’s race.


Personal Response
Growing up, I was a big fan of the Alice series by Phyllis Reynolds Naylor. It follows Alice from elementary school, and just ended with a book catching us up to Alice’s 60th birthday! I can see the Lola Zola series stretching out like that, growing up with the girls who read it and acting as a guide and inspiration as they do. I was a shy kid so I loved reading about characters that were bolder than me, and Lola is definitely that girl! She’s very sassy, but at the same time she is relatable and faces issues that most girls face, so it’s inspiring that she deals with real issues while still being true to her personality. I would really like to see this turned into a TV series, or even made-for-TV movies, because the stories are so vivid that I think they could translate really well to screen, and reach even more girls in the process.


Related Links
Keep up with Lola Zola on the blog: LolaZola.com and on Twitter: @tweenorama. Get your own copies of the books from Amazon: Lola Zola and the Lemonade Crush and New Girl on Salt Flat Road.

*Disclaimer: I was sent free copies of these books in exchange for an honest review. All opinions are my own.