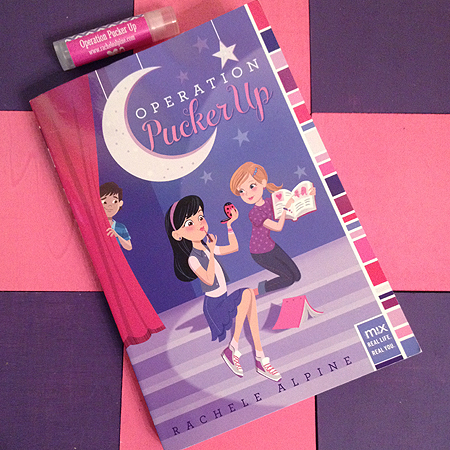 Plot Summary
Seventh-grader Grace Shaw is ecstatic when she beats out the eighth grade theater girls for lead in the school’s production of Snow White. Things don’t seem so great, however, when she can’t even tell her mom and sister the good news because her dad showed up for dinner after living on his own for months. It only gets worse when Grace realizes she’ll have to kiss one of the most popular boys in school in the final scene of the play - and she’s never been kissed before! Her two best friends get to work developing “Operation Pucker Up” - a detailed plan to get Grace kissed that fills a notebook. But no plan can go off without a hitch, and that includes Grace’s life onstage as well as at home.


Critical Analysis
Alpine’s first middle grade book is very well-written and strong. Her first novel was for young adults and really enjoyable, but it seems she’s found her niche with tween writing! She makes the characters come alive as relatable people, and good role models for tween girls. The family dynamics are perfectly done, handling a sensitive topic like parental separation with ease. The emotions are not overly sentimental, and there is genuine humor in the story, not silly gimmicks aimed too young for the targeted age group. Alpine’s explanation of theater terms are just right - not too long for those who already know the meanings, and just enough to make readers with no theater knowledge feel in-the-know.


Resources
+     Lockhart, E. Dramarama. New York: Disney-Hyperion, 2007. Print.
Two friends who try to avoid attention go to a summer theater camp where one becomes a star, and one doesn’t have the talent she originally thought; both are forced to rethink their friendship.
+     Matson, Morgan. Since You’ve Been Gone. New York: Simon & Schuster Books for           Young Readers, 2015. Print.
Emily’s parents are playwrights, and though they’re not the focus of this novel, it’s a great book that has a lot of theater infused into the storyline.


Related Activities
This book will make you want to put on a play! If you have the time and resources, go for it! If this isn’t an option for your class or for a library program, take a shortcut! Ask students to pick a favorite play or fairy tale, and they can read the parts aloud like Grace’s table read. This way, you get the feel of a play without needing costumes or sets. You could even gather other classes or library patrons for an audience!


Read it for yourself!
Alpine, Rachele. Operation Pucker Up. New York: Aladdin, 2015. Print.