Working in a library, I bring home new (to us) books pretty much every day. Even so, some books just don't hit the spot at home like you think they will when you're browsing at the library. Sometimes you just have to go back to your favorites, the books with worn spines that you've read time and time again.


That was this week for us. 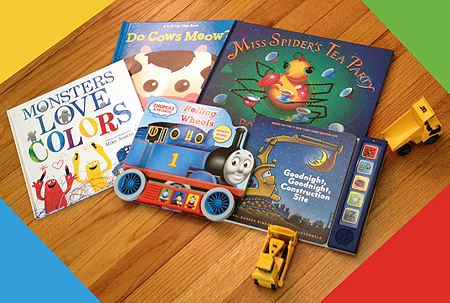 Monsters Love Colors by Mike Austin. We got this book from the library over a year ago, and we both loved it so much I added it to our wishlist. We bought it recently with some Barnes and Noble ebook settlement credit (I still don't understand the whole thing, but I'll take it!) and have read it countless times since it arrived on our doorstep! My son calls every color "bah-loo" or "yallow" or "orange" - yeah, he can say orange perfectly, go figure! But anyway, I thought it would be a fun book to help him work on his colors, so I ask questions about the monsters and give him a chance to name the colors before the monster can. Don't get me wrong, though - we DO just read it for fun a lot! It's a super silly fun book about monsters dancing and wiggling as they play with colors. It's so bright and creative that you won't mind reading it aloud every night!

Do Cows Meow? by Salina Yoon. My brother, sister-in-law, and nephew gave this book to my son for his first Christmas, which means I literally can't count how many times we've read it. We read it a lot before he was really speaking because he loved animal noises, and could do them really well. Once he figured out how to lift the flaps, it was over! He asks for this book almost every night by saying "Cow one!" It's a good book to quiz your kid about animals - names and noises - just like Monsters Love Colors is good to help learn the colors. It's also just a fun book to read aloud, because you get to make animal noises with your kid!

Miss Spider's Tea Party by David Kirk. This is actually my copy of the book from when I was younger, but I didn't really remember the story too well. My son has been asking for it a lot lately, calling it "the yallow one" (because of the spine color) or "bird-day party!" (because of the tea party), and I don't mind reading it aloud often at all, because the rhymes are great, and it's a cute story, and my son loves pointing out the different bugs.

Thomas and Friends Rolling Wheels. My son loves trains and Thomas, so when I saw this book at Target I had to grab it. It was his first "interactive" book, where he can press the buttons to play a sound clip at certain points in the story. I didn't initially realize that you also rolled the wheels along with parts of the story, so that's become my son's favorite thing to do. Who doesn't love being involved in the story?! The book is pretty short, and it's definitely aimed at fans of Thomas because it's not really a standalone book, it's pretty much just merchandise. That being said, it's not bad to read night after night because it's so short, and though there are only three buttons, there are nine sounds total so you don't hear the same thing over and over and over.

Goodnight Goodnight Construction Site by Sherri Duskey Rinker and Tom Lichtenheld. We have the interactive version of this book because my son loved the previously mentioned Thomas book so much. He loves construction sites and machines, so I thought the sounds would add a lot to the story for him. He really loves being able to push the buttons at the right parts in the story, and will carefully check out the icon on the page and match it up with the buttons on the right side, catching himself with a soft "nope" if his finger is hovering over the wrong button. He asks for it pretty much every night, and I have to say I get a little tired of reading it, just because it's a longer story, and sometimes my son isn't the quickest with pressing the right button, so the story drags on a big longer. It's a fun book, though, and I think the sounds add a lot to a story like this.