I couldn't help myself this week: I brought home books from the library pretty much every day... I'm SO thankful I don't work at a bookstore - we'd be broke! 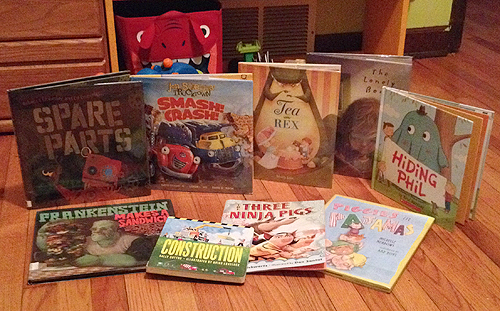 Spare Parts by Rebecca Emberley. My son is crazy about robots right now, so I had to bring this one home for him. It's a cute book about Rhoobart, a robot made of secondhand parts, who needs a new heart. He looks everywhere, asks for help from everyone, but can't get a new heart. The illustrations might be a bit creepy if you have a young or sensitive child, because Rhoobart isn't a polished cartoon robot - he looks like he's put together from scraps. My 2 year old and I loved it, though, so I hope you will too!

Smash! Crash! by Jon Scieszka. Along with robots, my son is all about cars and trucks and machines, so I knew I had to check out this book. Also... Jon Scieszka is my major author crush - have you met him?! He's SO charming and great with kids and quick and witty... wow. My family (including my son, who was only 2 months old!) met him when the first Frank Einstein came out, and it was a childhood dream come true. We've read (and re-read!) all of his books, but I hadn't read anything about Trucktown. It was fun to read for the first time with my son because there's so much to explore - the story is fairly simple, but fun, and there's a lot to look at and talk about in the illustrations and the end papers. Definitely want to read more from Trucktown!

Tea Rex by Molly Idle. I fell in love with the title and the concept because it reminded me of my friend's wacky, silly ideas. Because I already had her sense of humor in mind, the book fell a little flat for me - it was very straight-forward in the story of inviting a T-Rex for tea, and I think there was room for a lot more silliness. Overall a cute book.

The Lonely Book by Kate Bernheimer. Sweet book about a girl who checks out a forgotten book, accidentally returns it, and forgets about it again. The pictures are beautiful but seem more aimed at adults than the kids hearing the story, but the story is interesting and my son seemed to be listening the whole time (but he is a budding book nerd, so...).

Hiding Phil by Eric Barclay. This is one we first read two years ago, when my babe was actually a baby! We just re-read it this week and he's asked for it several times since. It's a very short book about kids finding an elephant and wanting to keep him as a friend, so they try to hide him - but hiding an elephant is hard. A lot of great opportunities to talk to your kid while you read this one and get them involved in the story.

Frankenstein Makes a Sandwich by Adam Rex. We already liked Adam Rex because the movie Home is based on his book The True Meaning of Smekday, and we are completely in love with School's First Day of School. This is a book of silly monster and (sometimes) food poems that took us a couple of nights to read (due to attention problems), but was constantly asked for! My son would point and say "Monster one!" even after we had read our nightly two books. It was really funny to me, too, so I can't wait to read more of Adam Rex's poems and books.

Construction by Sally Sutton. Along with robots and cars and trucks, my son loves construction sites and machinery. This short board book was a major hit - he carried it around the library proudly until he checked it out, and we've read it every night since.

The Three Ninja Pigs by Corey Rosen Schwartz. Dan Santat is probably one of our favorite illustrators,  and he really made this book come alive. The pigs were silly and the illustrations were gorgeous, so it was a fun book to read aloud.

Piggies in Pajamas by Michelle Meadows. My son loved the rhymes in this book, and the idea of pigs creeping around when they should be in bed, but narrowly escaping their mom each time. I hope he didn't get any ideas...  Shh! Was that a creak in the hallway?
Posted by Unknown at 10:18 PM