I’m pretty hit-or-miss when it comes to reading nonfiction. It’s not what I gravitate towards, but if I’m interested in something, I’ll read about it. I especially love memoirs, anything by Bill Bryson (hilarious!), and anything that reads like fiction (Jon Ronson is really growing on me). I only read 15 nonfiction books this year, so it wasn’t too hard to whittle the list down to 5. 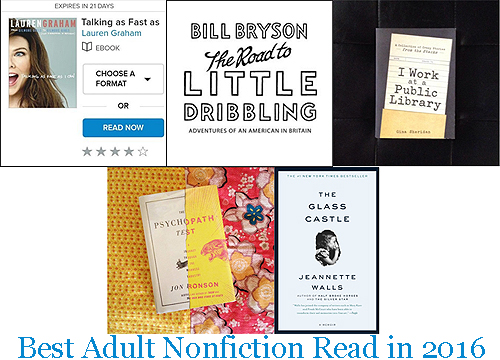 Pictures from my Instagram, except for The Glass Castle, which I apparently didn't photograph.
Also, eBooks are dominating this list, which doesn't make for good photos.

In order from most recently published to oldest:

Talking as Fast as I Can by Lauren Graham (2016). Disclaimer: I love, Love, LOVE Lauren Graham! I love her on Gilmore Girls and I love her on Parenthood and I’ve loved her little cameos on Newsradio, Seinfeld, Third Rock from the Sun, yada yada yada. So I started this book expecting to love it. Actually, I was waiting on pins and needles to get a chance to read it, because my library only got a digital copy and I was #9 on the holds list. Waiting for a book you’re dying to read is NOT easy! I was laughing out loud within the first few pages. It was a great book, and makes me want to be friends with Lauren Graham even more than I already did. Highly recommended if you like the actress, or memoirs, or laughing.

The Road to Little Dribbling by Bill Bryson (2015). Bill Bryson is always a treat, but he’s gotten better with age. Now he detests stupid people more than he used to, and it comes across in his writing. His informative prose is very well-written, but the glimpses into his thought process are more hilarious than ever. I’ve spoken to a few people who didn’t think this book was as great as his others, but I thought his asides were really funny. I also enjoyed the history of England and descriptions of certain locations, but this might be because I visited England a few years ago, loved every second, and think of it often, so this book was a great chance for me to revisit.

I Work at a Public Library by Gina Sheridan (2014). I’m sure it’s no surprise to anyone, but I love Love LOVE this blog and the book. So funny. I read it in a single sitting because I couldn’t put it down. I think librarians and civilians will love this book equally because it’s so easy to imagine each scenario happening.

The Psychopath Test by Jon Ronson (2011). I love Jon Ronson because he’s witty and somewhat snarky but writes very well, and his nonfiction really pulls you in. This book was incredibly interesting, and referenced a fair amount of Them, which is the next book I will read by him (about conspiracy theories - yay!). I’ve previously read So You’ve Been Publicly Shamed, which was just as fascinating as it sounds. His subject matter is always incredibly interesting.

The Glass Castle by Jeannette Walls (2005). This book has been on my TBR forever, and recommended to me by countless people. I am so glad I finally got to it. The stories are so interesting, and I love Walls’ writing style. Definitely going to read more from her. Highly recommend this one.