Back to School: Favorites 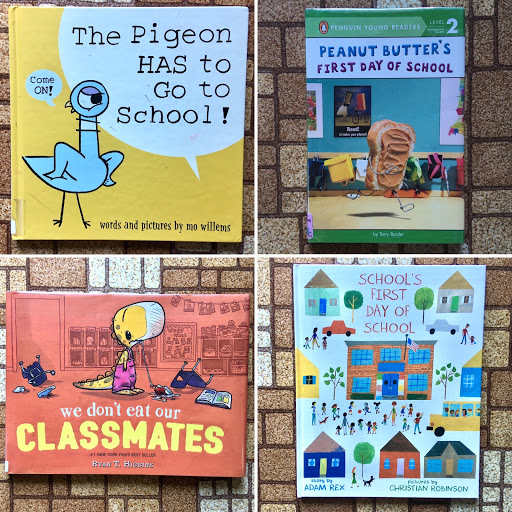 These are just a few of my favorite Back to School books. There's something about the humor in these books that makes starting a new school year a little bit smoother for everyone involved, students and teachers alike!
First off, who doesn't love the Pigeon?! He's a well-known character sure to put students at ease because of his familiarity. He's so silly in The Pigeon HAS to Go to School! by Mo Willems, resisting school because he's so scared, before realizing school is exactly what he needs! I don't know about you, but my favorite part is being as silly as possible when I read the "Whazza whazza WHAA?!" part.
Some students might already be familiar with Peanut Butter and Jelly from their other books, so I like to show those characters going back to school, too. In Peanut Butter's First Day of School by Terry Border, Peanut Butter is worried about what the first day of school will be like, and everyone gives different answers on how to prepare for the day. Peanut Butter just stays true to himself even though he was scared, and it all works out in the long run.
We Don't Eat Our Classmates by Ryan T. Higgins is, if you ask me, the perfect back to school book for younger children. It's hilarious, but also is a good way to teach the rules and how to be kind to friends. There are a lot of jokes in the illustrations, too, which makes it a great book to read at the start of the year so these younger students will know how important it is to look at a book's pictures in addition to listening to the story.
I already consider School's First Day of School by Adam Rex and Christian Robinson a classic, because it's been in my life for four long years now, since my own kid's first day of school! I love reading this book every August because it's a fun way to show kids that they're not the only ones nervous about starting a new school year!
Posted by Allison at 7:30 AM