Take Me With You by Tara Altebrando

Take Me With You by Tara Altebrando 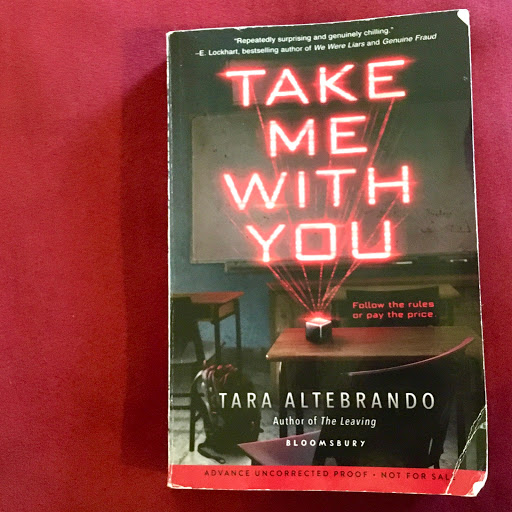 Thanks to @kidlitexchange, Bloomsbury Publishing, and Tara Altebrando for sharing an ARC of this book! It released 6/23/2020, and I know I've been in quarantine for too long when I see that date and think "Oh good, I'll be able to review it before it's released!" ... It's mid-August, people. I need to look at a calendar.

This book is a page-turner! Four students who hardly know each other are summoned to an empty classroom after school, and no one knows why. Until they see a strange device on the teacher's desk. It's almost like an Alexa, except... it's not. When the students try to leave the room, the device says that they must take it with them. Then more rules are revealed, often after one of the teens does something wrong. The consequences seem steep, and they're scared into doing what the device asks. Meanwhile, the device is also trying to figure out its purpose, and it needs help from the four teens it has under its control.

The suspense in this book had me flying through the first 200 pages, but as soon as an explanation about the device started to come to light, it lost me. I know I'm an adult reading a YA book, but even for teen readers, I don't think the surface-level resolution will be enough. There was potential to really explore this resolution and push it to the limit, while also wrapping things up nicely, but it fell flat and still feels unresolved to me.