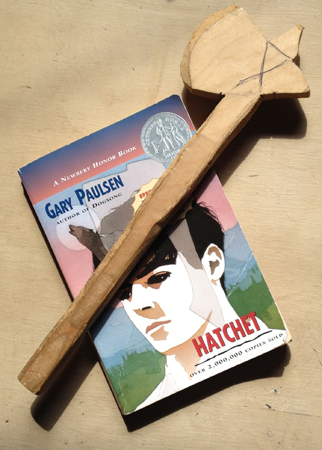 Plot Summary
Brian Robeson is flying on a small plane to visit his father in Canada. This is his first time visiting his dad since his parents split up, and Brian hates that he knows why his mom wanted to divorce. He's battling with himself over whether he should tell his dad that secret when the pilot of his plane has a heart attack. The pilot had just shown Brian how to steer the plane, but of course that isn’t enough to ensure Brian gets to his father safely. He radios in for help, but is left on his own to try and land the plane. After crashing, Brian is wounded but still alive. He is left in the Canadian wilderness to forage for provisions and build a shelter, not knowing how long he’ll be on his own before he’s found.


Critical Analysis
Hatchet is a really interesting story that will draw in a lot of teen readers; who doesn’t secretly love the idea of trying to make it on their own? The book is a little slow to start, with too much time spent with Brian and the pilot in the loud cockpit and not much story being developed. The flashbacks to Brian learning his mother’s secret were also a little tough to follow. They were spaced from the action of the story, but might be more accessible for reluctant readers if they were their own chapters with the timing clearly noted as a flashback.
Learning how to survive alongside Brian makes for an adventurous read, but a lot of the writing seems a bit too poetic to keep the attention of reluctant readers. Pauline employs a lot of repetition which makes the story sound nice, but the fragments make it a little hard to follow the story, and teens who aren’t avid readers will likely get frustrated. This is unfortunate, because the book could be edited down to be very concise and readable for different reading levels. Even so, it could still be a suitable book for middle grade children, especially if they are more advanced readers. The book doesn’t have explicit language or scenes; though Brian does learn to survive by killing fish and small animals, the visuals aren’t gruesome.
This book deserves to be a young adult classic because the struggle is timeless: being stranded in the wild with nothing to help you except your own skills. Even with today’s plethora of technology, teens could equate being in Brian’s shoes to being without their phone! Books that have such a timeless theme will always be relevant for readers.


Related Activities
Teens are very dependent on technology these days, which can be great! It’s a necessary skill in most job fields, and it’s easy to create images, videos, and audio files on a variety of devices. When Hatchet was written, Brian didn’t have any of today’s technology—and even if he did, it probably wouldn’t have worked in such an isolated location.
Host a “Survival” program for teens. Assign each patron or small groups a task, like: how to collect rainwater and make it safe to drink; how to identify poisonous berries and plants; how to start a fire. The possibilities are endless! Give teens time to research their subject, either in the stacks or online. Give time for the solutions to be shared. Then, have everyone turn in (or off) their device. Pass out good old fashioned paper maps, and give each teen a route to trace. Start in your city and send them to the other side of the country, or to a little-known city hidden in the middle of your state. See how well teens do when they have to read a map themselves, without the help of Google or MapQuest! Whoever makes it to their destination first (and on real roads!) wins a prize!