The Absolutely True Diary of a Part-Time Indian 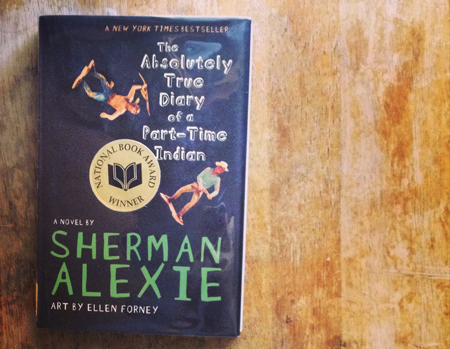 Plot Summary
Arnold Spirit, more commonly known as Junior, lives on a Spokane Indian reservation with his parents and a close knit group of friends. Though life on the rez can be hard, Junior makes the best of it by keeping a cartoon diary. “I draw because words are too unpredictable. I draw because words are too limited” (Alexie 5). No subject is off limits, even Junior’s birth defects that resulted in a large head, seizures, a lisp, a stutter, and thick glasses, and get him bullied by other kids on the rez.
Despite all of his setbacks, Junior is a smart guy, exited to start geometry on his first day of high school. But when he discovers the class textbook is the same one his mom used, Junior knows the reservation is only holding him back. He transfers to Reardon, a school in a nearby rich, white farm town, where he can get the most out of his education despite being the only Indian kid. Junior struggles to fit in and make friends while balancing his life on the reservation, where most people have turned their backs on him. When Junior gets a chance to play his old team on the basketball court, he has to confront his old and new identities and decide who he really is inside.


Critical Analysis
Junior is a realistic, likable character that will draw readers in with his conversational tone. Everything, for example the medical explanations of his disabilities, is explained in simple terms that any reader can understand, yet it does not feel like the writing has been dumbed down. Reluctant readers will especially love the balance of illustrations with the humorous writing style. That being said, the book has been challenged for offensive language and being sexually explicit ("Frequently challenge books of the 21st century"), and seems best suited for teens age 14 and up. In fact, teens will probably relate to Junior’s attempts at fitting in with a new school while still being himself at home, and will be draw to the controversy that is created when he must face both populations at the same time! The story is overall heartwarming and inspirational, and is a good book for any teen who is ready to read about experiences they have faced or will be facing in high school.


Related Activities
Junior keeps a diary by drawing cartoons of his family, friends, and things that happen to him. He says “when you draw a picture, everybody can understand it” (Alexie 5). He says that drawing bridges gaps that languages can’t; that everyone can understand a drawing. Have your teens start a cartoon journal. They can draw a “cast of characters” of their family and friends — real life depictions or caricatures. They can draw things that have happened to them that make them happy, angry, or afraid. If your group is feeling especially open, hang up the drawings at the end of the program (with signatures covered or on the back). Encourage conversation about what they see in others’ drawings: can they tell what is being depicted? How does it make them feel? Have they experienced something similar? This could encourage a sense of community without teens having to raise their hand and speak up with everyone looking at them. Even if the group doesn’t feel like putting their art on display, starting a cartoon journal might really help them get their thoughts and feelings onto paper without the frustration of searching for the exact right word.


Resources
The Absolutely True Diary of a Part-Time Indian is a frequently challenged book based on many different criteria, which can be seen on the ALA’s "Frequently challenge books of the 21st century" list. One of the reasons this book is challenged is because of “cultural insensitivity”, probably due to the fairly negative, stereotypical presentation of Native American culture Alexie portrays (though it is fictionalized from his personal experiences). Encourage teens to research Native American culture after they finish this book, and compare and contrast what they learn with what they read in Alexie’s books.
A great site to learn about Native American legends, like the one Junior’s dad shares about Turtle Lake (Alexie 223), is First People of America and Canada.
Teachers and librarians can also find great print and online resources on the Native American Children’s and Young Adult Literature page from the University of Illinois at Urbana-Champaign.

Consider listening to this book, narrated by the author, which won the 2009 Odyssey Award!
Alexie, Sherman. The Absolutely True Diary of a Part-Time Indian. Recorded Books, 2008. CD.