I’ll Give You the Sun 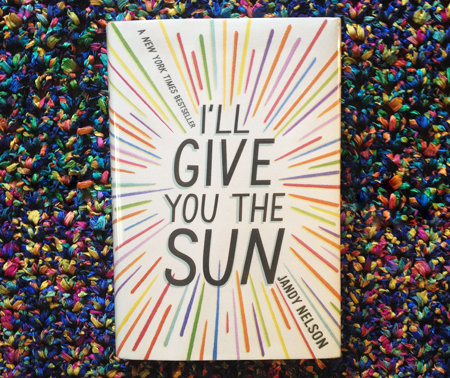 Plot Summary
Jude and her twin brother Noah have grown up being NoahandJude, sharing thoughts, souls, and dreams. When the twins turn thirteen, things start changing. Their mother wants them both to attend a prestigious art school, which triggers a competition between the twins. Dynamics within the family and with Jude and Noah’s friends begin to twist, and the twins are keeping secrets from each other. Initially they want to keep each other safe, then they try and hurt the other.
The story is told in alternating viewpoints across the span of three years. Noah narrates chapters when he and his sister are thirteen years old, just starting to explore their world and what is outside of their insulated twin life. Jude’s chapters are when the twins are sixteen, coming into their sexuality and understanding the world at large. Both characters are drastically different, their voices ringing true and unique with each chapter, though the reader can sense their twin connection. The twists of drama in the story will push the reader to read just one more chapter!, desperate to reach the fantastically satisfying resolution.


Critical Analysis
The characters in I’ll Give You the Sun are very unique, but in an approachable way. The reader is immediately immersed in Jude and Noah’s worlds, seeing things through their eyes, needing to read both sides of the story to learn what is really going on. Changing narrators, especially across the span of years, can sometimes be difficult to pull off, but Nelson has done this flawlessly, and teens will not feel lost in the story as the voices and times change. In fact, using both twins to tell the story is the book’s major strength. Getting into both Jude and Noah’s heads rounds out the action, and the span of three years switching back and forth each chapter keeps the reader in the dark about interesting things happening in the twins’ lives. While the story is strong enough to work even in a straightforward narrative format, the alternating viewpoints makes the book very alluring for teens.
This book is great for the typical Young Adult reader, aged 12 to 18—and beyond! The depth of emotion in the story makes it easy to relate to whether the reader has experienced events from the book, or is living vicariously through the characters. Jude is a great role model for girls as she regrets past decisions that once made her proud, and strives to change herself for the better. Noah is struggling with his sexuality, trying to decide if he should be true to himself, or try to avoid bullying and disappointing his father. Regardless of teens’ sexuality, this book is a great way to show different sides of a situation that often gets overlooked in fiction.


Related Activities
I’ll Give You the Sun is a beautiful book that tackles a lot of complicated issues. As a librarian, I would have a program about the book in general, with activity stations teens could explore according to their interests.
The Art Station. Noah and Jude are both artistic in different ways—Noah creates gorgeously realistic sketches and paintings, while Jude prefers to work with her hands in sand, clay, and stone. The Art Station has sketch pads, pencils, pastels, and paints for teens to draw whatever’s on their mind. There are also lumps of clay and kinetic sand they can use to sculpt. If no inspiration strikes, there is also a jar of prompts from the book teens can pick from. The slips of paper have scenes and topics from the book, as well as the titles of Noah’s art that could serve as a great jumping-off point to creating some beautiful works of art.
The Twin Tank. Jude and Noah had a lot in common, but they are drastically different people. The Twin Tank is a creative writing station for teens to write about an event—real or fictional—from their point of view, then rewrite it as their twin might have seen it. Their twin doesn’t have to be the opposite of the teen, but they definitely won’t be the same! This gives teens a chance to step out of their own lives and see things from a slightly different view.
Rule the World. Throughout their lives, Jude and Noah have been trying to rule the world. They barter with the sun, moon, sky, grass, flowers, trees, and other elements of earth to get small gifts of favors from each other. Break teens into partners or small groups and give them small symbols of the earth to barter with (either paper cutouts of each element, or scale model figures). Put a topic or item up for grabs and let them get to it! After ten or fifteen minutes, ask each teen or group to talk about what they traded and why.


Resources
Noah is a young teenager when he realizes he’s gay. He struggles with his identity, wanting to keep a secret to avoid teasing and to keep from disappointing his father. It takes time, and many mistakes, before Noah feels comfortable with who he is—but things don’t have to be that way. Teens have many resources at their fingertips, like:
- Gay-Straight Alliance
- It Gets Better Project
- StopBullying.gov
- Gay, Lesbian & Straight Education Network: Student Action