Tell Me Again How a Crush Should Feel 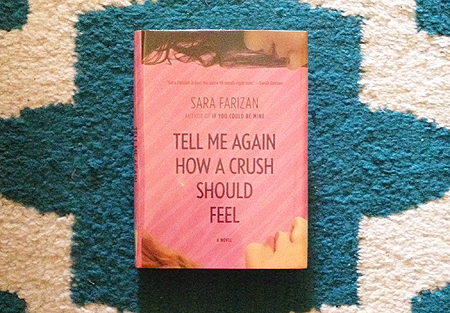 Plot Summary
Sixteen-year-old Leila Azadi likes girls. Really likes girls. But she can’t tell anyone. She’s already struggling to fit in at school due to being an Iranian-American in a sea of white students. And she’s already disappointing her parents by failing science and not becoming a doctor like they want her to; throwing an announcement about her sexuality into the mix would devastate them.
When an exotic new girl starts at Leila’s private school, Leila feels less alone. Sask. is from Switzerland, and gorgeous, and immediately befriends Leila. But it feels like something more than friendship… Leila has never felt this way before. She ditches soccer to try out for the school play alongside Saskia. But Leila still isn’t ready for anyone to know she’s a lesbian, and she isn’t sure Saskia is the best person to keep her secret…


Critical Analysis
Leila’s voice is honest and true—teens will find comfort in Leila’s world, even as she is experiencing emotional turmoil. The school environment Farizan portrays is equally as relatable, making this a valuable contemporary book for teens. Leila represents two minorities—mixed-race Iranian-American, and lesbian. Elements of Iranian culture that are incorporated into the story in the form of Leila’s father and social events the family attends are shown with respect and intelligence, so the reader comes away learning about the culture. The lesbian culture is also shown, with Leila falling for, and then striking down, stereotypes. None of those elements are heavy-handed, so the reader doesn’t feel like they’re getting hit over the head with political correctness, yet takes away tolerance and acceptance at the end of the book. The enjoyable, realistic depiction of two minorities make this book a necessity for contemporary young adult collections.
This book will appeal to teens because the story is easy to get caught up in, but to be superficial, I have to say the pink cover might be a turn-off. This book would be great for girls and boys to enjoy, but every edition I could find a photo of had the signature pink cover. When it comes to an attention-grabbing color, pink is it. But when it comes to a book you’d want to be caught reading in high school, regardless of your gender, pink looks fairly immature. If teens can get past the cover and read the jacket copy, however, I think they’ll be hooked.


Related Activities
Much like her character Leila Azadi, author Sara Farizan is the daughter of Iranian immigrants, likes girls, and dislikes science and math. Other authors have also incorporated a lot of themselves into their fiction, like Sherman Alexie in The Absolutely True Story of a Part-Time Indian. Invite teens to create a character using aspects of themselves and their personalities that they find unique or are especially proud of. Characters can be sketched, revealed in a short story, or even shown by a list of traits.
Leila had a secret that she wasn’t ready to share, but found that things weren’t so bad in the end. Have teens write down a secret on a small slip of paper. They can disguise their writing or write with their other hand if they don’t want to be identified. Teens can roll up or fold their secrets and place them in a jar, which will be sealed so not even the librarian can open it! It’s surprising how much lighter you might feel after getting your secret out - even if no one knows it.
If you’re lucky enough to have an especially open group of teens, share the secrets instead of sealing the jar! Have the teens leave the room and post all of the secrets on a bulletin board. When the teens come back in, they can read all of the secrets—silently! No calling out guesses or accusations of who wrote what.


Read it for yourself!
Farizan, Sara. Tell Me Again How a Crush Should Feel. Chapel Hill, NC: Algonquin Young
Readers, 2014. Print.