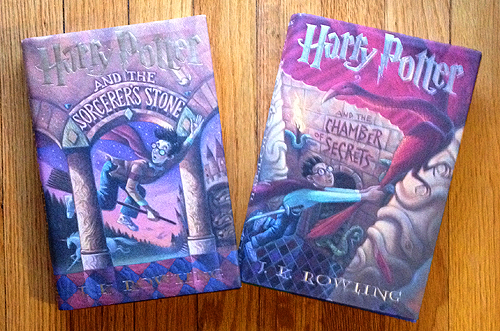 The Harry Potter series has been repeatedly banned in libraries, especially school libraries, because religious parents think it glorifies witchcraft. I just started reading the series this year; I didn’t resist it because of the witchcraft aspect, I just never liked fantasy books and was skeptical of the hype.

Well luckily I’m not afraid to admit when I’m wrong, because I love this series! I wanted to finish them all before the play came out at the end of July, but due to my classes, internship, and new job, that didn’t happen. In fact, I still haven’t finished the series! I read book six in August, and book seven and the play are sitting on my desk, staring at me. After getting a bit burned out on them, I’m ready to finish the series, but I have to find the time.

That being said, I don’t really understand why the series was banned. Witchcraft, sure, because the whole book is about wizards and witches and their magic, but it’s fiction. Fans might wish Hogwarts was real so they could enroll there, but it isn’t, and I don’t think reading about things that contradict your beliefs (or, again, are fiction) is a big, bad deal.
Posted by Unknown at 3:47 PM