(And last week, since I was caught up in Banned Books!) 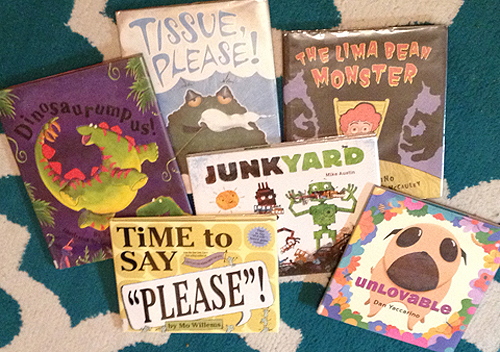 Dinosaurumpus by Tony Mitton. My husband read this to my son before bed one night. It sounded like a fun book, and they both stomped around afterwards, creating their own dinosaurumpus!

Tissue, Please! by Lisa Kopelke. This book was really cute because we had a cold going around the house, so we constantly needed tissues. My son is good at asking for tissues, and saying "please", but it was good timing to read them together in this book. My son is also very into hopping around like a frog lately, so he got to satisfy his frog curiosity.

The Lima Bean Monster by Dan Yaccarino. We're still on that Dan Yaccarino kick, and this was a fun book to read because vegetables might be good for you, but that doesn't make them good! Beans grow into a crazy monster that starts attacking all the adults, and only the kids can save the day!

Junkyard by Mike Austin. The illustrations in this book are gorgeous. My son loves robots so he liked seeing the robots and how they were constructed.

Time to Say "Please"! by Mo Willems. Mo Willems is always good, and even this nonfiction book about manners is fun for kids and adults to read. Willems' drawing style is as good as ever, and it was fun to watch the girl get the cookies she wanted in the most polite way possible.

Unlovable by Dan Yaccarino. The story of this cute little puppy who just wants a friend is really funny. The pup imagines his new friend next door is a dog who's bigger and tougher than he is, so he lies about his size to save face. After all, they're separated by a fence, so how will he ever be found out? Until his new friend starts digging a hole so they can meet... 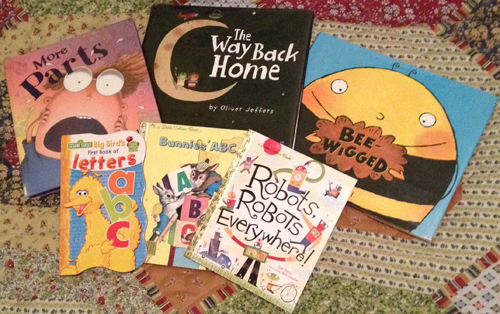 More Parts by Tedd Arnold. This book talks about cliches that are common for adults, but, when taken literally, mean something very different, especially for kids! It's a little too old for my son, but he enjoyed pointing out all the different body parts.

The Way Back Home by Oliver Jeffers. My husband read this to my son the other night, and they both had a lot of fun with it. My son liked pointing out the alien. I read it myself and thought it was really sweet and beautifully illustrated, as Oliver Jeffers books are known to be.

Bee-Wigged by Cece Bell. Cece Bell is so hilarious, and this book is no exception. A bee is tired of everyone being scared off by his stinger, so he finds a wig and passes as a boy! He goes to school and makes a lot of friends, but what happens when his wig falls off? This book has a great twist that made us both laugh.

Big Bird's First Book of Letters by Sesame Workshop. My son is pretty good at his alphabet already, but he loves reading this book because he can name the elements in the pictures, and of course he loves the Sesame Street characters.

Bunnies' ABC by Garth Williams. This is another ABC book my son likes reading because he can name the animals and objects in the pictures. Some animals are a little obscure, but hey - it's vocabulary building!

Robots, Robots Everywhere! by Sue Fliess, illustrated by Bob Staake. Hello, Robots! by Bob Staake is one of my son's favorite books, so when I saw that he illustrated a different robot book, I knew we had to get it. The rhymes are really cute and my son loves it, so I know it'll be read often in our house.
Posted by Unknown at 8:14 PM