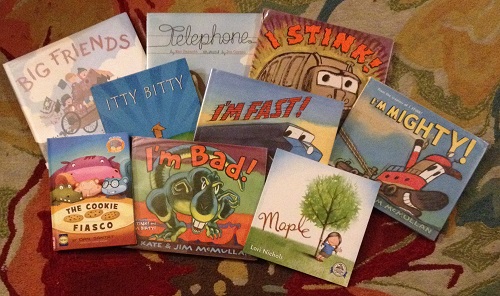 Big Friends by Linda Sarah, illustrated by Benji Davies. This is a beautiful book about two friends who imagine boxes as different things. They play together perfectly, until a new little boy enters the picture. One boy isn’t sure how three friends can play together, and distances himself, until he is shown what true friendship is.

Itty Bitty by Cece Bell. Cece Bell is always a winner! This cute book is about a tiny dog who makes a cozy home in a big bone.

Telephone by Mac Barnett, illustrated by Jen Corace. This funny book is based on the game Telephone. A mama bird needs her son to come home for dinner, so she tells one bird, who tells another bird something slightly different, and so on and so on. This book is better for older kids and parents who can get the joke. It doesn’t really work as a cohesive story without understanding the telephone concept.

I Stink! by Kate McMullan and Jim McMullan. We found The Stinky & Dirty Show on Amazon, and my son has been obsessed ever since. We read I Stink! When he was just over a year old, so of course he didn’t remember it. I checked it out again, plus more in the “series”, and he loved seeing those characters in the book again.

I’m Fast! by Kate McMullan and Jim McMullan. This was probably my son’s favorite from the McMullan series, and I enjoyed it more as well. A train is racing a car across the country, and that story was a little more developed than other McMullan books that kind of allude to the duties of the vehicle, but are told more in sound effects and boastfulness.

I’m Mighty! by Kate McMullan and Jim McMullan. This one was about a tug boat, and how strong he is even though he’s smaller than the boats he helps. This is probably my second favorite in the series we’ve read so far.

The Cookie Fiasco by Dan Santat. Super-obvious disclaimer: Dan Santat is always awesome. This book is about four animal friends who have to figure out how to share three cookies...but even if your kid is too little to understand the math, it’s a fun story - especially if you do the voices! I don’t really like the framework of Elephant and Piggie reading the story… It might be engaging and familiar to kids who love those characters, but it’s not necessary to make this story pop.

I’m Bad! by Kate McMullan and Jim McMullan. This McMullan book is about a dinosaur who wants us to believe that he’s big and bad and scary! It’s a fun book with a great twist at the end - I think younger kids will love this one - especially if their mama reads it to them! (Sadly-necessary disclaimer: That relates to the ending, is not a sexist comment.)


Maple by Lori Nichols. Sweet book about a little girl who is named after the maple tree her parents planted before she was born. The tree is her best friend, but she sometimes she thinks she would like to play with someone else. Then she finds out she’ll be getting a playmate! This is one of those books that is probably more for the parents than the kid.
Posted by Unknown at 3:32 PM