What Was the Great Depression? 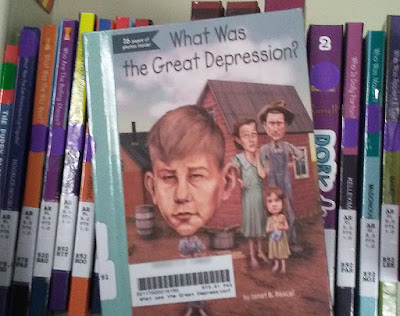 It's taken me a long time to write about this because I waffle about social media and this blog so much. I can never decide if this space is personal or professional, but there is a point when those two intersect, and I think it is important for me to share my experience.

Social media is too often focused on looking your best, sounding your best, always coming across as the happiest, most satisfied person ever. That's fine - who wants to read negative stuff on blogs and social media when the news spreads that information for us? I also admit there is a difference between trying to make the best of a situation and trying to act like it is perfect - and I struggle with that regarding what and how to share on social media.

This blog was my happy place when I was a library science student, reading and reviewing books for a class, envisioning how I would put my degree to work once I graduated. A job opportunity came up before I was finished with my last semester, and I took it, even though it started immediately and meant I had to find last minute child care for my two year old son, and juggle two classes (one of which was CATALOGING, wow!), an internship, and a sign language class (for my personal interest) while learning a new position. I should have said no, but I was so worried that it would be my only opportunity. I should have said no because I was not offered the job I applied for, but one the system thought I would be better suited for. My coursework still applied, so I thought it would be ok. I made the best of it in real life (and genuinely enjoyed it for a long time) and acted like it was the perfect fit on social media.

Personally, having my young son in someone else's care full time really ate at me. I know you do what you have to do, and I was lucky to have had so much time with him in the first two years. But I had always planned to stay home with him, at least part time, until he started school. But I felt so strongly that I had to take the job that was offered to me. Eventually it wore me down, especially when the system expanded their hours, meaning I was working a handful of nights and weekends every month. Other aspects had changed enough to make me not enjoy the job as much as I wanted, and it all led to me taking a different job that helped the family most.

Another position came up, and due to some family changes over the summer, I thought taking that job would be best. This job sounded good on paper, but in reality different things were expected of me, with limited time to complete them, and no support from administration - even after repeatedly asking for it. I was still working nights and weekends, except now I was at home churning out lesson plans. Lesson plans that met the standards the system required, but students didn't appreciate or care about. That's not how I wanted to be a librarian. I won't even dip into my thoughts on public schools and instead direct your attention to the image at the top of this post. The Jeopardy clue that is the answer for would be "Allison's time working in the public school system." But online, when I posted (SO RARE, if you look back over this blog and its instagram) I pretended all was fine.

Until I couldn't pretend anymore. I'm not trying to drag those jobs over the coals and rip them to shreds for being unfair or awful. They were just awful for me. I think it is so important to have a job that you love, that you are passionate about, that makes you feel fulfilled. You don't have to work all the time, or talk about your job all the time, or think you are changing the world. It just has to make you feel good, in whatever way you want. If that means working retail 20 hours a week so you have time for something else, fine! If you want to work 60 hours as a lawyer, that's fine too! It's all individualized, and that is important to remember.

I'm saying that for myself as much as anyone. I kept feeling pushed to take a job just because it was offered to me. I wish there was a trial period to transition to a new job, because it definitely would have influenced me with at least one of those jobs. I feel like it would have helped my happiness so much - to know exactly what I was getting into before committing. Before feeling like a failure for leaving. Before feeling dumb and aimless for taking and leaving X jobs in X years. And maybe it is irresponsible, or not how someone else would do it. But I value my happiness over almost everything else (wow does that sound selfish!). I know that if I am not happy, everything else in my life will suffer. I am lucky - no, I need to stop phrasing it that way, as if it just so happened to work out that way. I have worked hard since my early teenage years as a babysitter, and I have saved money so I have a buffer. Gone are the days of someone retiring from the same company that hired them straight out of school. Gone are the days of companies keeping someone for that long and rewarding them for their loyalty - so many companies here have been "downsizing" once the bulk of their employees are a certain age, just casting them out and making it so hard to find a new position at their older ages.

But I digress. It has always been important for me to feel happy at my job. Not consumed by it, not overwhelmed by it, not stretched thin by its demands. But balanced. And I know this means your personal life has to be satisfying too, and that was definitely a problem I was struggling with as a new mom and newlywed, so this period in my life wasn't all job-centered.

I want to feel like I am making a difference on a more individual level. I don't care if the public school system gets more money from the state because I am helping them hit their numbers. I care that the students who came to me learned something from me - however minor that may be. I hated that students would see me in public and greet me, and I thought of them as strangers. I didn't know their names or what grade they were in because I was seeing 860+ kids every two weeks, and connecting with none of them. I don't care if I get do implement all of my creative ideas in my job. I care that those in management want to hear those ideas and value me for coming up with them. And I think I've found that job. But more on that later.

I just wanted to share all of this in the name of transparency, to not get too personal and not call out any systems in particular, but to say that it's not always real online, and it's ok to get real and not be happy pretty posed instagram shots all the time. And to thank everyone who has been there for me - some online since the start of this blog, some on instagram even though I haven't posted regularly in too long, some in person from one job or another, some who have always been there. And now I click "Publish" before I overthink it because... why not?
Posted by Allison at 12:29 PM