I always enjoy looking back over the books I read in a year and grouping them into genre categories, and then ranking them. I use the star ratings on Goodreads for each individual review, but when it comes to picking my favorites, I typically just go for the ones that stuck out in my mind. Too often I hear a title or see a cover and try to remember if I read it or not, because it seems vaguely familiar but I have no clue what the story was about. Well, these are not those books. These are the books that I loved reading and that I have recommended to many others as soon as I finished the last page, and now I'm recommending them to you.

I'm including publication years because I am not one of those hip book bloggers who limits "Best of 2019" to books that were actually published in 2019 - I'm not sure I read enough of those. These are just books I happened to read in 2019, but this year it's interesting that 2/5 were published this year, and 2/5 were published last year. How very contemporary of me. 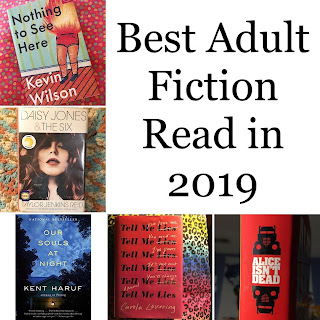 Our Souls at Night by Kent Haruf (2015). If I could have picked all of Kent Haruf's books for this list, I would have. And yes, I know it's my list and I can do whatever I please, but 5 is such a delightful number for a round-up list. Anyway, I discovered Haruf this year thanks to a bookstagram/librarian friend, and I am forever in his debt. I later found out that my dad loves this author but never recommended him to me, and I'm trying to not harbor anger about that. (Joking, kind of.) Anyway, something about Haruf's writing is so simple and beautiful and powerful. If I had to compare him to anyone, it would be Steinbeck, and I love me some Steinbeck, but I think Haruf beats him overall.
Our Souls at Night was Haruf's last book, published after his death, but it's a great final book. It's not part of his trilogy, but it is set in the same town. Some of the dialogue makes vague references to Haruf's previous work, which might seem like he's full of himself, but it's actually so amazing and self-aware and really made the book, in my opinion. The story itself is wonderful - an elderly widow and an elderly widower are neighbors and begin a relationship, kind of out of the blue. They are honest and to the point and everything about it makes you want to strip your life down to the necessities and forget the rest, which is a good way to look at Haruf's other works. He only has 5 novels, so do yourself a favor and read them all. If you only read one, read this one. If you're reading them all, please read them in publication order.
Our Souls at Night was made into a movie on Netflix, but I'm debating watching it. I always love the book more than the movie, but this book was SO GOOD that I'm not sure if the movie would ruin it for me, even if it's decent.

Alice Isn't Dead by Joseph Fink (2018). I love the Welcome to Night Vale podcast, so when Alice Isn't Dead started as a podcast, I downloaded all the episodes. I never got a chance to listen, due to time constraints, having a small child around, etc. So when the book came out, I was excited to get to experience the story in some way. The book is AMAZING. Such a great mystery, such creepy circumstances, and the writing really portrays the suspense. I still haven't listen to the podcast, but I think I'll re-read the book next year and then make time to start listening. Have you listened to the podcast and/or read the book?

Nothing To See Here by Kevin Wilson (2019). I would have chosen this one on the anticipation alone. Kevin Wilson has been one of my favorite authors ever since I read his story collection Tunneling to the Center of the Earth years ago. Every time I find out he has a new book being released, I get incredibly excited, because he does surrealism so... realistically. I had this book on my "To Read" Goodreads shelf ever since it was announced, and then it was an October Book of the Month choice, so I got to read it before it was officially released! Waiting from when I chose my book to when it was delivered was almost unbearable, but of course worth it.
Kevin Wilson is one of my favorite authors for the way he can make you laugh and make you cry with straightforward words, not trying too hard. When I saw this book was about spontaneous human combustion, I was worried it might be a little too out there for me to really be interested in (or believe) the subject matter. But Kevin Wilson is the king of taking slightly strange or unrealistic aspects and making them understandable and palatable for any reader. As always, his stories are about the characters more than what’s actually happening to them, and he presents some amazing, realistic characters in this book.

Daisy Jones & the Six by Taylor Jenkins Reid (2019). I know this book has already won awards and is on so many "Best of" lists, but I think it's earned, and not just hype.
This book blew me away. I love classic rock and the band lifestyle of that era, and this is a great interpretation of that time. I loved the style of the writing. I have to admit that I'm a huge Aerosmith fan, and when I was in 8th grade I got a copy of their autobiography, Walk This Way. It's told as interviews with band members, and I read it so many times I probably still have parts memorized. This book reminded me so much of that, so it rang true to me. I loved the approach, the rock stories, the music. I have to say, it's hard for me to get into "music" in books, as in the lyrics written out. I couldn't hear it in my head so I mostly just skimmed. Also, the “twist” didn’t do much for me, but I can see how it affects the story overall, so I’ll take it, but I felt like it was presented in a strange way, and meant to be a big reveal, but it just didn’t work for me. Overall I loved the book though, and am reading more by the author already. I haven't listened to it myself, but I've heard the audiobook is told with many different actors doing voices, and I love how that must bring the story to life.

Tell Me Lies by Carola Lovering (2018). I wasn't sure what to expect when I checked this book out just because I was seeing it everywhere, but this book blew me away. There was a lot of drama, which kept it interesting and had be turning the pages. Even with that being said, it was so real, so well developed, and so intriguing. Many of the characters made me think of real people, which was both good and bad considering the main male character was a psychopath. I could hardly put this down.

Have you read any of these adult fiction books from my top five? Which ones? What are your top five books read in 2019?
Posted by Allison at 11:04 AM