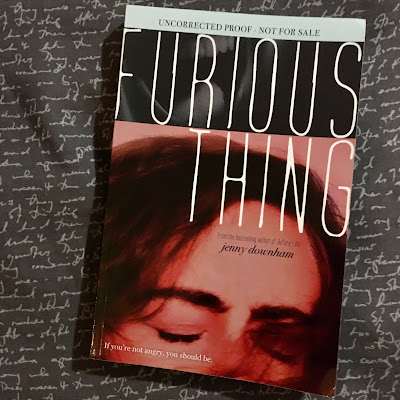 Lex and her mother used to be close. The banded together and made the most of what they had, which wasn’t much. Until John came along. John was rich and said he loved Lex’s mom, “even though” she had a child. John himself had an older son with his wife, whom he eventually left for Lex’s mom, but not before playing a bunch of headgames. The games don’t stop once John proposes to Lex’s mom, years after they started their affair. The two even have a 6 year old daughter together, whom John dotes on. But John can hardly stand Lex, and he doesn’t hide his feelings. He treats her more like he treats her mother, the woman he is supposed to love. His abuse isn’t physical, but he lies, twists his words, withholds his affection, and is hot and cold. He starts gaslighting Lex to the extent her teachers agree she is unstable and needs medication. But Lex just wants them to see who John truly is, instead of seeing the successful architect, the brave man who took on a poor woman and her angry daughter.

This book made me angry in many ways - not because of the writing or the plot, but how realistic it was and how unfair it all is. I thought John was very realistic and his type of abuse needs to be brought to light as much as possible so people, especially teen girls who will be reading this book, are aware of the possibilities. I do hope books like this continue to be written for YA audiences so they are informed.

That being said, I  wish some of the storyline was a little clearer so the important aspects could stand out more. BEWARE OF LIGHT SPOILERS AHEAD IF YOU INTEND TO READ THIS BOOK! Lex most often acted out in anger when John was arguing with her mom, so I thought it was because she was trying to get his attention away from her mother. But she acted out a time or two in school, so maybe it wasn’t that. And if it wasn’t, that’s fine, but I was unsure about why she acted out. (Please note that statement is extremely generalized - I realize mental illness was part of this story, and Downham did a wonderful job explaining how ADHD can present differently in females.) I know it could just be something mentally making Lex act that way, but the pattern almost made it seem like she was sticking up for her mom, so it was a little misleading. Then she started on medication and seemed ok? Or was she just tired of fighting? That was unclear to me as well. And the relatively happy ending didn’t sit too well for me, because the anger from earlier in the book seemed abruptly gone, even though John was still in the picture (though apparently “harmless” now?), and Lex was off medication, so I’m unsure about how that ending came about.
Posted by Allison at 11:17 AM