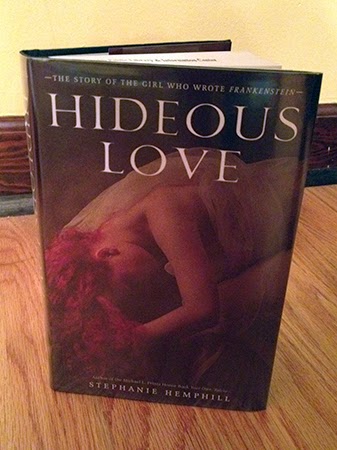 Not only is my son a little too young for this book, but I read it too quickly to share with him!
Plot Summary
Mary is an educated girl living in a time when women are typically just wives and mothers. Her intellect captures the attention of her father’s friend, poet Percy Shelley, and they run away together. Unfortunately, Shelley is still married to another. This begins a lifetime of drama and turmoil for Mary, who loves Shelley unconditionally and lives for him, learning, and writing.


Critical Analysis
Written as a verse novel, Hideous Love is a powerful story about the life of Mary Shelley, author of Frankenstein, told from her point of view. The poetic style comes across as genuine and works because Shelley is a writer herself, and an intelligent woman with strong emotions.

Rhythm.
The book is broken up into poems, each titled as a chapter would be in a traditional novel. This division provides a natural break for the reader, as most poems encompass a major event or emotion, then move smoothly to the next experience. The flow of each poem individually is affected by the line breaks, which are well-placed to make the reader pause and think about certain words and ideas. For example:


“I busy myself
to think of a story,
but sadly the muse does not
arrive. I want to speak
to the mysterious fears
of our nature and to awaken
thrilling horror.
Nothing comes to me” (126).

The short lines inspire the reader to ruminate on what is being said, instead of rushing on to the next line. “I busy myself” and “I want to speak” stand out as the actions, implying that Mary is trying hard to come up with a story but can’t, though she wants to get the words out. “Mysterious fears,” “awaken,” and “thrilling horror” stand out in the next two lines, adding urgency and emotion to the stanza. The last line is a let down, deflating after the build-up immediately before.

Rhyme.
There is no rhyme scheme in the poems of this book; it is written in free verse.

Sound.
The individual poems have no particular sound as far as alliteration, consonance, repeated words, and so on. However, there is the tone (maybe just in my imagination) of a somewhat quiet yet educated voice reading these poems in a level voice.

Language.
The language in this book is perfectly chosen. Each word sounds like one Mary Shelley herself would pick for her writing, so it really helps the reader become immersed in her life story. Most ideas, emotions, and experiences are explained in straight-forward terms without simile or metaphor, but that does not diminish the quality of the story at all. In fact, I think it helps to make the book seem like it is actually from the 1800s.

Imagery.
Sensory words are used to establish the environment of Mary’s childhood home and her overbearing stepmother. It effectively conveys the destitute journeys Mary and Shelley took in the early years of their relationship. And it vividly draws the reader in to Mary’s grief… but I’m getting ahead of myself.

Emotions.
The emotion in this book is my favorite aspect. Mary is so sure of herself as a young teenager, and then falls so helplessly in love, and all of that is shared with the reader. The rocky start to her relationship and all the heartache that comes later is felt in the words of the poems. Though the book is so emotional, it is not heavy-handed, not forcing the reader to shed tears due to sentimentality. Instead, the language stays matter-of-fact and true to Shelley’s style. For example:


“I see my future
now not as something
intangible like a dream,
but like a boat
meeting land
after time spent at sea,
a destination I will reach” (38).

Simple language and a simple idea, but beautifully expressed to sweep the reader away with the words.


Personal Response
I had previously only read one verse novel, years ago, and was not a fan. I’m so glad I read Hideous Love, because I’m now inspired to read more verse novels! It was very well done, and incredibly interesting. I found myself researching Mary Shelley as soon as I finished the last page. I had never known much about her, never even read Frankenstein, but this book was so engrossing that I immediately checked out her most famous novel and am eager to read more - not only by Mary Shelley, but also by Stephanie Hemphill!


Reviews & Awards
From The Horn Book: “In first-person, present-tense verse, author Stephanie Hemphill creates an informative, impressionistic introduction to Mary Shelley’s life.” Booklist says “This is, as intended, an ideal companion piece for teens studying the original classic,” and I have to agree. Hemphill’s previous work has won a Printz Honor and the Myra Cohn Livingston Award for Excellence in Poetry.


Connections & Activities
Instead of having students write traditional reports on notable figures, let them be inspired by Hideous Love. After researching their intended subject, have them write their report in verses, as if from the person’s point of view. This will make them think differently about the assignment - instead of simply regurgitating and repeating important facts, they’ll put themselves in someone else’s shoes, try to see the world through their eyes, and give them a more interesting approach to learning about history. They might even be inspired to go above and beyond the required research to find out as much as they can about their subject’s time, in order to better write from that point of view.