The Llama Who Had No Pajama 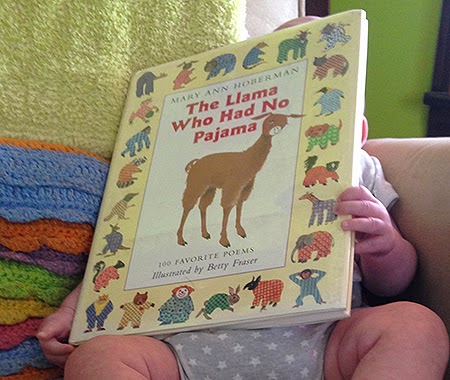 
Critical Analysis
This is first and foremost a poetry collection, but the illustrations are a major part of the book. They add a lot to each poem. For example, the page spread featuring a poem called “Mouse” is accompanied by a drawing of a playful mouse chasing its tail around the poem, covering both pages (20-21). Some pages have an illustration as a background: “How Far,” “Growing,” and “A Year Later” are printed on the backdrop of a watercolor sunset over a lake (41). When multiple poems are featured on a page, Betty Fraser draws smaller illustrations for each poem. This layout makes the book much more interesting to children, and invites them to read the poem by showing them what it’s about before they even get to the words. For children who can’t yet read on their own, they can look at the pictures while the poem is read to them, and be more involved with the ideas than just listening alone.

Rhythm.
The cadence of these poems is perfect for children because it has a natural up and down flow, encouraging the reader to raise and lower their tone throughout each line. There are a variety of poems - some long, some short, some with long lines, some with choppier lines. This assortment is a great way to keep children interested because no two poems are alike.

Rhyme.
The poems in this collection rhyme, which is ideal for children. The rhymes create a natural rhythm, which makes reading poetry more fun. Rhymes also help grab their interest, and may even help in memorizing poetry, or just help them feel included by being able to chime in with the rhyming words! Many different rhyme schemes are employed throughout the book. Hoberman primarily writes in couplets and simple 4-line rhymes, but also plays with assonance, consonance, and alliteration in the lines.

Sound.
Hoberman employs great use of sound throughout this collection. For example, in the poem “Worm:”

The words are playful and encourage the reader to squirm along, becoming more and more antsy with each additional adverb. Many of Hoberman’s animals poems are written this way, helping the reader picture how the animal looks, feels, and sounds.

Language.
Not many metaphors and similes are used throughout the poems because the writing is very straight-forward and realistic. Hoberman chooses vivid words to accurately portray the experiences written about, such as birthdays, vacations, weather, and family relationships. The words are nicely chosen because they are not juvenile, even though the poems are aimed at children. The words are not over their heads, but they encourage the children to use context clues to derive meanings.

Imagery.
Even if this collection was not illustrated, Hoberman’s language alone would bring the poems to life. Her word choice, when describing anything from a birthday bus to a termite, makes the reader not only visually imagine the subject, but also approach it with the other senses by conveying the scent, sound, and touch of objects written about.

Emotions.
Since the collection is intended for children, Hoberman keeps the mood light. The poems don’t delve into deep emotions, but they are not all overly perky. They have a upbeat tone, but the happiness of the poems does not undercut the quality of the writing by making it seem too silly or lighthearted.


Personal Response
This collection is fun to read aloud because the poems have great rhythm and rhyme. I loved some poems more than others, but with any collection there is some hit and miss involved. I agree with the assessment that this is a great introduction to poetry for children.


Reviews & Awards
From School Library Journal: “Hoberman's rhythms are lively and agile, and her imagination and sense of humor are still in tune with young readers. Fraser's simple but detailed gouache and watercolor illustrations exhibit the same qualities. The layout is masterfully varied and never overwhelms the poems.” Mary Ann Hoberman’s work has previously won the American Book Award. In 2003, she received the Award for Excellence in Poetry for Children, and received the Children’s Poet Laureate award in 2008.


Connections & Activities
Ask children which poem was their favorite, then have them write a poem of their own in similar style. If they’re having trouble, suggest they work backwards! First, think of rhyming words and jot them down. Then they can make sentences with the rhyming words at the end, and put them in poem format to tell a story or describe something!