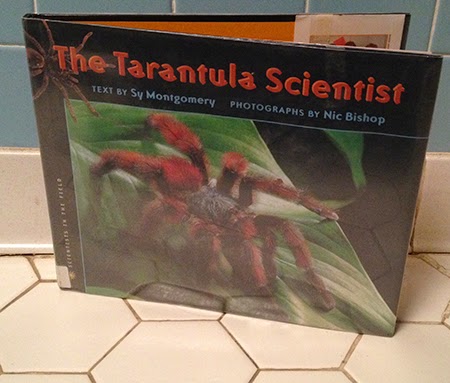 Plot Summary
Tarantulas are misunderstood, billed as the scariest, deadliest spider known to man. In reality, their bites have never killed a man, and they would rather hide than harm a human. In this book, Sy Montgomery follows Sam Marshall, an arachnologist who studies wherever the tarantulas call him. The book explains the parts of tarantulas, how they got their name, spiders who are confused as tarantulas, and more. Sy Montgomery follows Marshall as he stalks tarantulas in South America, then studies them in his lab in Hiram, Ohio.


Critical Analysis
Accuracy.
The book is clearly well-researched, since Sy Montgomery conducted much of her research right alongside Sam Marshall. The book ends with a lot of information about handling (or not…) tarantulas, spider statistics, and a breakdown of terms used throughout the book. There is also a section about how the book was researched, giving details about the author and photographer and how they compiled the book. There is also a bibliography, as well as websites to further research tarantulas.

Organization.
Montgomery has the perfect approach to this book: he writes to the reader as if they already know everything, yet explains things in ways that build them up to actually know everything. Difficult words are spelled out phonetically in parenthesis, and a lot of terms and methods are explained, but not in a way that makes readers feel dumb. Chapters are creatively titled, but not listed in a table of contents.

Design.
It is hard to speak to the book’s attractiveness, since I personally am creeped out by tarantulas despite learning that they are not harmful to humans. Trying to be diplomatic, I must say that Nic Bishop’s photographs are amazing. There are extreme close-ups, showing the true beauty of tarantulas. The photographs aren’t limited to tarantulas, also showing wasp nests and Marshall at work in his lab. There are photos on every page, even if it’s a text-heavy page with just a few tarantulas “crawling” up the margins.

Style.
This book was a little more cut-and-dried than the others I read for the informational genre, but that didn’t make it hard to read. It gave a lot of great information about tarantulas, as well as gorgeous (I have to admit!) photographs. The author didn’t seem especially passionate about the subject, but I think in this case, it worked to have some distance from the author and the subject. I think an author who loved tarantulas too much might have made the subject harder to handle, but the book was written as a perfect mix of knowledge and passion.


Personal Response
I have to admit that I’m not a big fan of spiders, especially tarantulas, but this book completely drew me in. The photographs, I could have done without. I shuddered every time I looked at them! But the knowledge I accrued from reading this book was amazing! Tarantulas are something I never would have looked into on my own - I think they’re too creepy, but honestly, most of the knowledge I had about them was false! I loved learning that they didn’t harm humans, and that they had teeth as well as fangs, and more. I think that reading children’s nonfiction will actually be the way I approach learning new things that I don’t really want to learn about!


Reviews & Awards
From School Library Journal: “Informative, yes, but even more important, this is a vivid look at an enthusiastic scientist energetically and happily at work, both in the field and in the lab, questioning, examining, testing, and making connections. A treat, even for arachnophobes.”
From Booklist: “Enthusiasm for the subject and respect for both Marshall and his eight-legged subjects come through on every page of the clear, informative, and even occasionally humorous text. Bishop's full-color photos, which concentrate on detail, not scale, are amazing--Marshall coaxing an elusive tarantula into the open or bringing readers literally face-to-face with a hairy spider. […] Readers will come away armed with facts about spiders in general and tarantulas in particular, but even more important, they'll have a clear understanding of how the answers derived from research become the roots of new, intriguing questions.”


Connections & Activities
The Tarantula Scientist is part of a series called “Scientists in the Field,” which can be further researched at ScienceMeetsAdventure.com. Other books in this series include:
Hidden Worlds: Looking Through a Scientist’s Microscope by Stephen Kramer and Dennis Kunkel. ISBN 9780618354054
The Mighty Mars Rovers: The Incredible Adventures of Spirit and Opportunity by Elizabeth Rusch. ISBN 9780547478814
Eruption!: Volcanoes and the Science of Saving Lives by Elizabeth Rusch and Tom Uhlman. ISBN 9780547503509