What To Do About Alice? 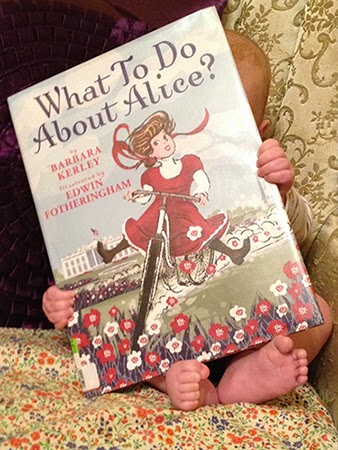 Fun fact: My son has the same name as Alice’s father!
Plot Summary
Alice Roosevelt was unlike the other girls of her time. She called the way she lived life “eating up the world” - but her father, Theodore Roosevelt, said she was “running riot.” Alice’s mother died when she was just two days old, and her father remarried and had more children. Alice never really fit in with the family, preferring to join an all-boys club and race her bike around town. Instead of attending boarding school, she convinces her father to let her learn from his personal library. After Roosevelt is elected president, Alice travels extensively as her father’s goodwill ambassador, taking the world by storm.


Critical Analysis
Accuracy.
In her bio, author Barbara Kerley mentions how and why she became familiar with Alice Roosevelt. This leads one to believe that the book was a labor of love, researched because the author was enthralled with her subject. Kerley has written other picture book biographies.
The book ends with an author’s note, giving information about why her father’s second family might have prompted Alice to act out and what she did with her life past the scope of the book’s text. There is a small section that gives attribution to sources of various quotes, and a note that both the text and illustrations were fact-checked, though only a name is given, not a title or affiliation.

Organization.
This informational storybook is organized like a fictional storybook, which will certainly engage young readers. Though it’s nonfiction, the book doesn’t seem boring or fact-laden; Alice is as bright and energetic as any fictional character. There is not a page without an illustration, and the text is formatted to look aesthetically pleasing as well, with different layouts, fonts, and font sizes. Since it reads in chronological order like a traditional storybook, there is no need for chapter headings or an index.

Design.
This book is beautifully done. Edwin Fotheringham’s illustrations help the book read almost like a comic or graphic novel, yet are gorgeous enough to be framed. The text is straight-forward and almost basic compared to the illustrations, but the elements work together to give a more rounded story overall. For instance, after being warned by her father to avoid publicity, the next page simply reads “‘Oh, Alice.’” If only the text were being heard, this page would sound boring; when shown the illustrations, however, there is a two-page spread where Alice is being surrounded by newspapers with headlines all about her. There are also jokes in some of the illustrations that are missed when reading the text alone. I think this is a great approach because it seems sly and humorous, just like Alice herself.

Style.
The style of this book is fun and lighthearted. This is clear from the front cover all the way to the author’s bio in the back. It’s clearly a project that both the author and illustrator were passionate about. The illustrations are playful and the text gives a broad overview of Alice Roosevelt’s life, encouraging further exploration by giving just enough information to pique the reader’s curiosity. The summary on the end pages complete the story of Alice’s life, but overall the book seems to be a great introduction to biographies in general and Alice Roosevelt in particular. I think it will encourage further reading.


Personal Response
I wasn’t a big fan of informational books as a child; biographies seemed especially boring. I’m thrilled to see that the genre has had a complete overhaul. I can’t count how many times I’ve flipped through this book just to look at the pictures. The text is fun and interesting and easy to read, but the illustrations are what really grab me, and I feel they will grab younger readers as well. I will look for more Kerley biographies because I appreciate her approach to the genre. This is Edwin Fotheringham’s first picture book, but I am already seeking out his other illustrations from The New Yorker, Vanity Fair, The New York Times, and more.


Reviews & Awards
This book is off the charts! It is a Sibert Honor Book, Boston Globe-Horn Book Honor Book, Irma Black Award Honor Book, Publishers Weekly Best Book of the Year, School Library Journal Best Book of the Year, Kirkus Reviews Best Book of the Year, an ALA Notable Book, and has won the Washington State Scandiuzzi Children’s Book Award and the Parents Choice Award. (Phew!)
In a Booklist starred review: “Irrepressible Alice Roosevelt gets a treatment every bit as attractive and exuberant as she was... Kerley's text has the same rambunctious spirit as its subject, grabbing readers from the first line... The large format gives Fotheringham, in his debut, plenty of room for spectacular art." Publishers Weekly also gave it a starred review, saying “It's hard to imagine a picture book biography that could better suit its subject than this high-energy volume serves young Alice Roosevelt.”


Connections & Activities
“Well-behaved women seldom make history.”
This quote has been attributed to many noteworthy women, such as Eleanor Roosevelt, Marilyn Monroe, and Anne Boleyn. The earliest version that could be found was in a 1976 academic paper by Laurel Thatcher Ulrich. Ulrich is now a Pulitzer-Prize-winning professor at Harvard, but was a student at the University of New Hampshire when she wrote the article in question. (Read more here.)
Have students check out more biographies about other women who spent their lives “eating up the world.”
I Am Amelia Earhart by Brad Meltzer. ISBN 9780803740822
Eleanor by Barbara Cooney. ISBN 9780670861590
Joan of Arc by Diane Stanley. ISBN 9780064437486
Bon Appetit! The Delicious Life of Julia Child by Jessie Hartland. ISBN 9780375969447