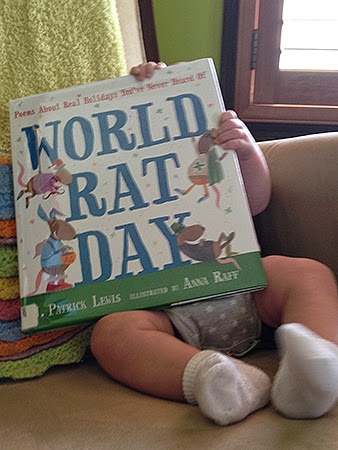 Plot Summary
Maybe you knew there was a World Turtle Day, or even a Bulldogs Are Beautiful Day. But there is no way you knew about Yell “Fudge!” at the Cobras in North America Day! Thank goodness J. Patrick Lewis wrote poems about all the strangest, silliest holidays you’ve never heard of, and compiled them in World Ray Day.


Critical Analysis
Arranged in chronological order, World Rat Day goes through the calendar year of odd holidays. Twenty-six humorous poems about the silliest of subjects - it’s got to be good! The poems range from four lines to having multiple stanzas. The date and holiday name is included with each poem, though the poems also have their own titles.
The illustrations perfectly match the poems - not just as illustrations go nicely with a story, but the drawing style itself. Anna Raff uses watercolors and line drawings to bring Lewis’s poems to life. In most cases, the illustrations add another layer of story to the written poem. This makes the book excellent not only to read aloud, but also to take time inspecting the pages.

Rhythm.
The rhythms vary throughout this collection, but each poem has a distinct one. Many are extremely choppy, such as “A Flamingo” (23), which is a single sentence, and “The Rat Is” (10), which is two short metaphors. Both of these poems are very funny, so they seem to be short in order to simply deliver the joke. “A Thousand Baby Star” (12) and “Bats” (13), on the other hand, have longer lines and longer stanzas that give the poems a leisurely flow.

Rhyme.
Lewis uses a variety of rhyme schemes, including couplets, ABCB, ABB, and more. Some poems, such as “Eight Table Manners For Dragons” (2) are free verse; the jokes are puns within the lines themselves.

Sound.
These poems are funny, so the reader can do a lot with his or her voice while reading aloud to ensure children are captivated. Lewis uses a lot of alliteration, consonance, assonance, and onomatopoeia to give his poems personality.

Language.
The language in this collection has clearly been carefully chosen to be approachable for children to read on their own, but also to sound interesting when read aloud. Words like “boomerang” and “airmailed” aren’t found much in children’s books, but they can be read easily, without a child stumbling over the word, and add a great sound to the lines they’re in.

Imagery.
When a poet uses the phrase “electrified confetti” to describe fireworks (12), you know he’s got some great imagery in the rest of his poems! Even if the illustrations in this book were not spot-on, Lewis would help the reader imagine the subjects of every poem. Who else would describe a bulldog as “The sumo of canines / The semi of runts” (14)?

Emotions.
The poems in this book aren’t especially emotional, as Lewis seems to focus more on humor. There are some unexpectedly beautiful lines, though, such as “murmurs to moonbeams / And whispers on wings” (13).


Personal Response
This book was really fun to read - both because of the humorous poetry, and the off-the-wall holidays! It’s also a great book if you just want to look at pictures! Stories can be told from the illustrations alone.