Banned Book: If I Ran the Zoo

Edit 3/10/2021: Wow, this post has blown up with recent news/debates about Dr. Seuss. Some of the comments are disgusting, and it repulsed me to know that these people thought I shared their closed-minded, harmful, ignorant views.
I had completely forgotten about it, but I feel a need to update my somewhat pithy response about this book. People are allowed to grow and change, and over the years I have done more research and am working to be anti-racist, so I completely disagree with the post I wrote in 2016. I don't think it's "cancel culture" to discover that an old author's books are completely out of line in modern times.
There is so much QUALITY, open-minded, accepting children's lit out there that Dr. Seuss does not need to be read, much less celebrated. You might argue that he's classic, but there is no need to hold on to stale old stories when fresh children's lit is being published at an amazing rate. Children will not "miss out" on anything if they don't read Dr. Seuss in their childhoods. Read them books that show people of all different skin tones being accepted, read them books that show non-traditional families, read them books that show kindness and compassion. And show them that in your own words and actions as well. Dr. Seuss is not worth fighting for. 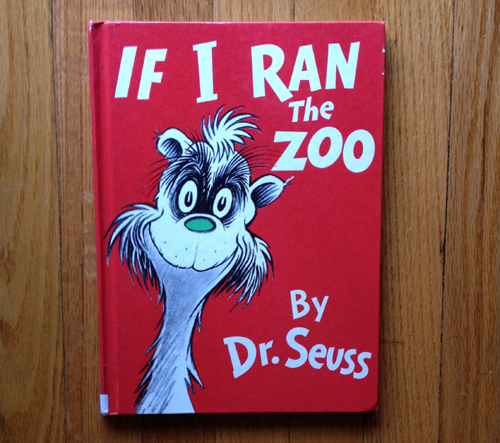 If I Ran the Zoo is a typical silly Dr. Seuss book, if you ask me, but it's been banned for the line "all wear their eyes at a slant", which refers to the helpers, accompanied by an illustration of Asian stereotypes.

I never knew why this book was banned, and had never read it before. It was, as I mentioned, a typical Dr. Seuss book to me, but seemed a bit long. I was expecting something along the line of Green Eggs and Ham or Hop on Pop, but this one was a real time investment.

That being said, I don't think it should be banned for the stereotypes portrayed on the pages - instead, turn them into a teaching point. Talk about why it's a stereotype and why it's offensive, and depending on the age of the children, talk about other stereotypes they might know, and debunk them. We should learn from history instead of try to ban it and wish we could erase it.
Posted by Unknown at 9:19 AM